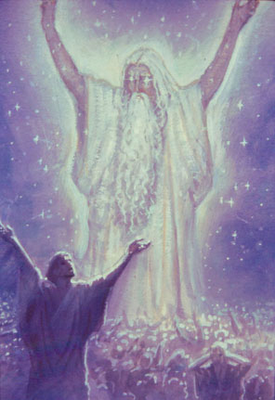 The superb choir of Westminster Abbey have been invited to sing at St Peter's pagan basilica in Rome for the feast of Sts Peter and Paul; to sing alongside the Sistine Chapel choir in fact at two papal liturgies. This should be interesting. You can read more about it here. Two choirs, two traditions (well, one actually). It reminds me of the Music of the Ainur, almost.

To my mind, it brings into focus pope Benedict's view of the Anglican patrimony, either how little he truly knows about it (or how badly he is advised) or his great impression of the quality of Liturgy as celebrated at the Abbey. Does he think that the Abbey is emulated by all Church of England parishes? The Dean of Westminster Abbey told me that the watered-down Evensong celebrated there during the papal visit was a compromise between Lambeth Palace and the papal entourage. Nevertheless, the pope was clearly impressed by it; a tunicled Crucifer, the apparelled albs and amices, the Queen's Almsmen, etc. What happened in the pseudo-Byzantine cathedral the next day was an absolute travesty of liturgy!

The news put me in mind of this quote from the Ainulindalë:

''And it seemed at last that there were two musics progressing at one time before the seat of Ilúvatar, and they were utterly at variance. The one was deep and wide and beautiful, but slow and blended with an immeasurable sorrow, from which its beauty chiefly came. The other had now achieved a unity of its own; but it was loud, and vain, and endlessly repeated; and it had little harmony, but rather a clamorous unison as of many trumpets braying upon a few notes. And it essayed to drown the music by the violence of its voice, but it seemed that its most triumphant notes were taken by the other and woven into its own solemn pattern.''