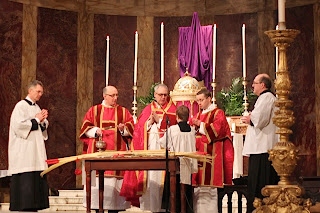 It would be nice to see some photos of a real Palm Sunday liturgy on the New Liturgical Movement blog. But no, instead we have Keith Harrison of the Birmingham Oratory wearing a red cope and blessing palm branches at a table facing the people. Is this part of the movement for liturgical renewal in the Roman church? Mediocrity and liturgical abuse in the Roman Rite? Thank God I'm no longer a Roman Catholic, that's all I can say! At least I have the freedom to say what I want about all this nonsense.

Rubricarius of the St Lawrence Press has published a very good commentary on the reform with his usual masterly commentary on the real thing here. I have said often enough that the most moved I ever was by liturgy was at a celebration of Palm Sunday four years ago, my first in the Old Roman Rite, at the Blackfen chuch. It was during the chanting of St Matthew's Passion narrative; Scripture in situ as it ought to be heard; and I understood every word.
Posted by Patrick Sheridan at 1:45 pm
Email ThisBlogThis!Share to TwitterShare to FacebookShare to Pinterest