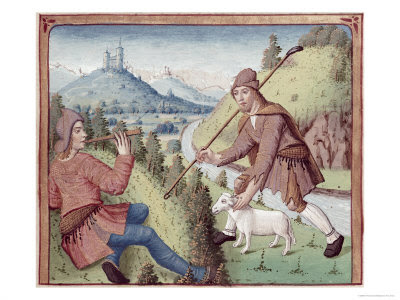 We don't hear much about early Christian Latin poets, do we? When we think of the Patristic age we tend to think of St John Chrysostom preaching or condemnations of heretics at General Synods of the Church. But Latin poets there were and a vast corpus of great poetry there is, much of it never translated into modern tongues. Classicists have always had a rather dim view of such poetry; they say that men like Lactantius, Ambrose, Cyprian of Gaul and Sedulius simply aped Virgil and Horace by using their forms and dulling them with images from the Christian Bible, which even to godly men like St Jerome was as dull as ditch water, though it told aright the history of Salvation. Church historians and theologians don't set a very high store by this poetry either as they tend to look to the more meaty stuff such as the Acts of General Councils and the sermons and epistles of great men like St Cyril of Alexandria. Even in the Patristic age itself poetry, particularly poetry set to iambic metre, or elegaic couplets or hexameters was seen as suspicious, partly because of the ancestral persecution of Christians by the Roman Empire, partly because of the pagan beliefs enshrined in those forms - ''lies, though breathed through silver,'' as C.S Lewis said in 1930. I think they're wonderful. They appeal to all my aesthetic inclinations, and to my understanding of Divine Service, and you can use them in good conscience as much as the Roman Canon, the Psalms or even the Lord's Prayer itself in your devotions.

I was at Westminster Abbey for Evensong yestereven, wearing my harp broach in honour of Her Majesty's Western Isle, and the service was magnificent. Plainsong Introit, Psalm, Versicle and Respond augmented by Palestrina Magnificat and Nunc Dimittis. Psalm 96, one of my favourites, too. At the verse O worship the Lord in the beauty of holiness for some reason (perhaps the later association of the trees giving praise to God with Tolkien's Ents?) I thought immediately of those seldom-heard poems and will dedicate some time to producing some of them here. One of my favourites, typical of many conversion stories throughout the Middle Ages (you know, heathen, miracle happens, converted heathen), is by (or at least attributed to) Severus Sanctus Endelechius, a contemporary of Paulinus of Nola. The poem is De Mortibus Bovum, On the Death of Cattle, and is obviously based on Virgil's Eclogues, beautiful pastoral poems about suffering and the intervention of local gods, at which I spent considerable time translating as a student of Divinity at Heythrop when I should have been reading about systematic theology!

Imagine, Bucolus and Aegon are shepherds and together bewail the death of their cattle by Plague and hear from a certain Tityrus (again, Virgil...) that his cattle were saved by Christ's Rood Token. The Latin is exquisite: Reading further you can see that there is even some polemic interwoven in the text. Tityrus says to the others, Come, let us go together, it is not far, and acknowledge Christ's Divinity. Of course, that's one idea. Truth is black and white, like pages of the Bible, but you can at least make it pleasing to the senses. No wonder good liturgy existed aforetime, but no more, but in far sundered places.
Posted by Patrick Sheridan at 9:12 pm
Email ThisBlogThis!Share to TwitterShare to FacebookShare to Pinterest