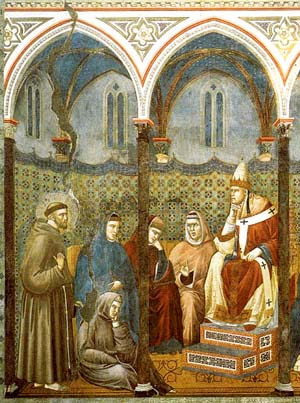 With yestereven's news, and especially the choice of papal name, I have turned once again to the subject of Innocent III's liturgical reform, carried on by his successors Honorius III and Gregory IX, and taken to the farthest reaches of Christendom by the Franciscan Friars. A good reference for this subject is The Origins of the Modern Roman Liturgy: The Liturgy of the Papal Court and the Franciscan Order in the Thirteenth Century by S.J.P Van Dijk and J.Hazelden Walker. I doubt liturgy is on the agenda for pope Francis but it will be interesting to see what kind of liturgy he celebrates publically, and whether he retains much (or anything) of Benedict's reform. His time spent with the Easterns might have some positive influence. Who knows? As I said yesterday, the fact that he came out onto the balcony without scarlet almutia and stole speaks volumes; I wonder if he'll have this approach to liturgy in general? As he is 76 years old and has only one functioning lung, I say: use well the days!
Posted by Patrick Sheridan at 1:23 pm
Email ThisBlogThis!Share to TwitterShare to FacebookShare to Pinterest