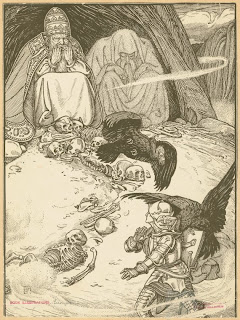 About two months ago I started a new job with another retailer. I was so sick of the abominable conditions, the prevailing culture of ignorance and being constantly at variance with the senior managers in my last job that I gave it up at the uttermost end of desperation, taking the very first job offer that came my way. Fortunately it was with a company which I have long admired. Unfortunately I am now about £12,000 a year worse off, I have forfeited all evenings and weekends and the contract runs out in January. In short, I have taken a dive to the very bottom and many of my contemporaries are 16 years old. However, not all is lost. I seem to be getting on extraordinarily well and if I am kept on after the January Clearance I shall be given a more favourable rota, a pay rise and generous staff discount. In fact, I have already applied for a better job within the Company, which I stand just as good a chance of getting as anyone (so I am told). As my mother so bluntly put in one of her characteristically barbed put-downs: "you just have to keep your 'real' personality as hidden as possible." But that might be unfair.

Another Christmass Temp joined us the other day; a young man named Tom. Well, it transpired that he is a Christian. When he told me, old feelings (long forgotten) of interest in that religion surged up only to be dashed when he elaborated and said "Pentecostal." I then realised that we had nothing whatsoever in common. He told me that his father had been a "pastor," and it was abundantly clear that he had no experience of anything beyond the weird confines of this world of hand-clapping and contemporary rock music. He might as well have told me that he practised vegetarianism. He asked if I believe in anything, so I said: "not really. I wouldn't have said I was a cynic but I suppose I am to some people. Nowadays I go to church only to shew support for various societies or ecclesiastical establishments and that has long ceased to be an act of religion." It was all wasted on him. He had no idea what "Anglican" meant, and even "archbishop of Canterbury" was no help so I thought better of saying anything about Orthodoxy. He hadn't even heard of St Charles the Martyr so Heaven alone knows how he has a degree in engineering. He didn't seem "stupid" in any particular sense just grossly misinformed which, I suppose, is a strong tendency among religious people. Thinking outside of the box, as the saying goes, is anathema to them all but there really is no excuse for that kind of ignorance. It just bolsters the charge of secularists that religious people are ignorant, and nowadays I am inclined to agree with them. And don't let's forget that with religions like "pentecostalism" goes a rejection of monarchy, aristocracy, monasticism and all the other traditional pillars of our society. These people really are the great unwashed.

Of course, you will have noticed by now that I am presenting to you a great dichotomy. It is invariably the problem of having simply rejected a religious model for a an irreligious one without having completely shaken it all off. I don't go to church. I don't read religious blogs anymore, nor do I read any of my books. But I still retain some of the values which went with it all. I am still just as intolerant as I ever was of the beliefs and, by extension, the motives of other people. But a sense of apathy has become an all-pervading tendency in my life. Life itself has been stripped bare. I don't read or watch the news or keep up with anything contemporary. I was only dimly aware of the situation in the Philippines because people were talking about it at work. I don't give to charity. I don't watch any television (except for University Challenge on Monday nights). I don't do any house work. I seldom listen to music, and when I do I listen to the same tune over and over and over until it becomes tiresome. I don't go out, except to work. I spend little money (though always seem to be short). No art, no music, no sex, no drink, no travel, no nothing really. I spend the days playing retro video games. This has become an activity to simply pass the time, and where they are so old, where they are so familiar it invariably means that I have to use as little imagination to complete them as possible. To demonstrate the point, a few months ago I bought the sequel to an old game on the original Playstation and I gave it up after five minutes because I didn't know what to do or where to go, and couldn't be bothered to try and find out. Any effort of mind or will has become anathema to me. I never bothered with physical exercise and people who do go to the gym are an alien sort. Even keeping up with friends has become tiresome.

Perhaps you're wondering whether these are the symptoms of depression? Well, I was depressed a year ago. I would say that now waking life has become tolerable. I am not unhappy. Insofar as I have any strong desires it is to shut out the outer world completely and become an island. No religion, no modern technology, no friends, no cleaning, no effort, no nothing. Maybe I practise a form of solipsism? After all, other people were never my first priority. Or perhaps I have just become insufferably selfish and lazy? That great God which searches all our hearts alone knows with what demons I wrestle in the wilderness of my own making. May they not prove the stronger!
Posted by Patrick Sheridan at 11:32 am
Email ThisBlogThis!Share to TwitterShare to FacebookShare to Pinterest