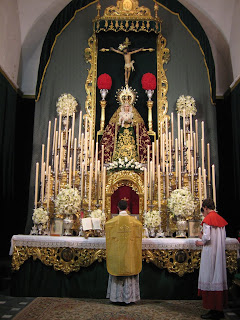 I went away for about six months and switched off. Between May or June of this year until this very month I thought better of reading any religious blogs because I found that they all rattled on about the same things. Well, I looked at the New Liturgical Movement again and found this article by someone I've never heard of. It's yet another appraisal of the "Benedictine Altar arrangement," and, typically, the author gets the very premise wrong and just repeats a lot of theories designed to water down an obvious abuse. I've heard all these arguments before and they're really quite meaningless. The fact remains that facing the wrong way is the absolute worst thing you can do liturgically. You cannot seriously ascribe the word "liturgical" to any compass direction you like or to some nebulous "inward orientation," and then expect orthodoxy to somehow fall into place; neither is furnishing an altar with gradines and claptrap in accord with the spirit of the Liturgy. The standing of any object whatever upon the mensa of the altar was completely contrary to the devotional conventions of the early Church and as for a crucifix, it is superfluous. Such things have nothing whatever to do with piety or liturgical orthopraxis but remain questions of aesthetics best left to the choice of the celebrant. If you wish to pile on more and more candles, flowers, and prayer cards, that's your lack of taste. Please don't try to make it the yardstick of orthodoxy.

I shan't repeat what Percy Dearmer brilliantly said about the "big six," so perhaps Dom Gregory Dix should have this one?

What preposterous nonsense it is to try to erect sacristy orthodoxies and even tests of theological allegiance out of these minute details of pious furnishing, that have varied endlessly throughout christian history and have never meant anything in particular by all their changes!
Posted by Patrick Sheridan at 8:50 pm
Email ThisBlogThis!Share to TwitterShare to FacebookShare to Pinterest