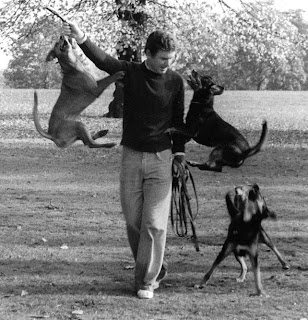 I always admired Brian Sewell. I found his Channel 4 series' The Naked Pilgrim and The Grand Tour very informative and amusing and I tend to appreciate people who call a spade a spade more than those who make a god out of diplomacy. Sewell has no time for the likes of Damien Hirst and other conceptual "artists" as his idol is the great Michelangelo, the greatest of all artists. Years ago I bought his book about his experiences in Turkey in the mid-1970s, "an escape from the tyranny of Western art," he called it. It called to mind the great Councils of the Early Church and a longing to visit the ruins of the birthplace of Christianity though it has become an abode of dragons. Of course, like everything else in my life, it hasn't yet materialised.

Sewell's appreciation for art and classic motors is shared equally by a passion for dogs. He is 82 years old and has never been without one. When Lucy died in November I tried half-heartedly to sum up my feelings for her in a badly-written post but I think that Sewell has done a better job in The Express newspaper. You can read his article here if you like.
Posted by Patrick Sheridan at 1:01 pm
Email ThisBlogThis!Share to TwitterShare to FacebookShare to Pinterest