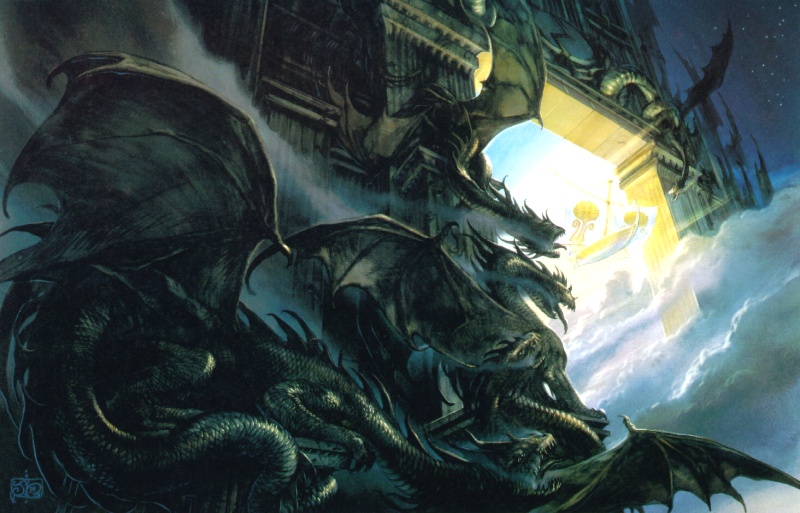 My contract with my latest employer expired on Saturday. On Sunday, contrary to my accustomed feelings about shopping on the Lord's Day, I went out and bought sixteen balls of aran wool. I figured that since I now have all the time in the world I'd knit myself a jumper. Can I knit? Well, I can do very basic cast-on and I have no pattern for my imagined jumper but I'm sure everything will be lovely (!). Most likely, however, the wool will be sitting there a year from to-day; just like the jam jars my mother bought me last Christmass (or was that the Christmass before then?) when I expressed a fleeting interest in making quince jam.Years ago I thought knitting was a form of witchcraft. This was because it was a skill that I didn't have. Similarly, J.R.R Tolkien once said that he had the deepest respect for musicians, considering them "wizards worthy of deep respect," if my memory of his letters is up to scratch, for it transpired that he had no recognisable talent for music. But crafts like knitting and embroidery seem to have come back into fashion these days (on a comparatively small scale). As for me, it is a means of trying to turn back the clock on this world; just like the Facebook account I so happily deleted when I was up to my neck in the mire of depression.. I am so ashamed to have been born into a time where (or when?) people are so ignorant and useless. My mother told me this very evening that years ago my grandmother made her own curtains. People don't make anything anymore! We live in such a cheap, throw-away society.

But, who am I to judge? I am just as lazy as (perhaps more than) the next slob. The jam jars will continue to gather dust just like the Lewis & Short I bought when I was studying Latin; and don't forget the aran wool! Someone said to me recently, "if you carry on like this, life will pass you by." So I said, "well, thank God for that, I nearly got mixed up in the beastly thing!" Did any of you ever read the full tale of Míriel Þerindë? She was the mother of Fëanor and in giving birth to him she languished and died, a dilemma which presented the first great riddle for the Valar in the legitimate exercise of their authority under God. It was a thing unnatural for one of the Eldar, at first to endure such suffering as would cause actual death (and, of all places in this world, in the Uttermost West where death had no presence) and, at the point of death, to have had no desire to be made healthy in the gardens of Estë. Míriel's story is very long and entails too many complex questions of soteriology to illustrate the point but she did indeed, after so long, return from the Halls of Mandos (death) but not to her family or to any of the people of the Gnomes; but instead to a kind of purgatory and she sought admittance at the House of Vairë by the shores of the Outer Sea. There she remained until the End of Time, recording the entire History of Arda in tapestries so marvellous that they seemed to recall to waking life the great deeds of the Gnomes in Middle-earth. I think that she could well have been inspired by the weavers of the Bayeux Tapestry, those women who, while telling the story of a Norman victory, glorified the Saxons at Hastings.

I want to be like Míriel. I think that her story obviates feelings of numbness I recognise in myself. Of course, in death she was reunited with her ancient husband, Finwë, and decked the Halls of Vairë. My own state of purgatory is hardly so romantic.

Image: John Howe. It is in no way related to Míriel's story but I guess we ought to rejoice in the paucity of Tolkien images on the Internet; at least images from The History of Middle-earth. At least those volumes haven't (yet) been marred by Peter Jackson.
Posted by Patrick Sheridan at 1:45 pm
Email ThisBlogThis!Share to TwitterShare to FacebookShare to Pinterest