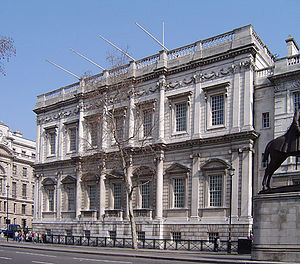 The Society of King Charles the Martyr will be holding its annual memorial and high Mass at the Banqueting House on Thursday 30th January (new style), beginning at 11:40am. Patricius will be in attendance.

Of course, the great irony is that, at the time of St Charles' martyrdom, England, while its people and institutions were plagued by monstrous forms of protestantism, followed the catholic kalendar of our long fathers of old and not the new kalendar haply introduced by Roman innovators on the continent.

I wonder what the English Ordinariate, founded to (apparently) rejoice in an English liturgical patrimony, will be doing on Charlesmass? Probably nothing, for it seems to be more important to them to sacrifice that which is good and ancient in the English traditions of their fathers on the altar of obedience to the pope than to safeguard and maintain that which has come down to them from times past in spite of Rome. When will people learn that the Papacy is a vacuum? You'll all be sucked into oblivion, gobbled up by the beast from the sea. I mean, look what the Papacy did to the Roman liturgy! Do you think that your traditions are safe? Think again!

But I was forgetting. Those Anglicans who sought union with the Papacy didn't really care much for Cranmer or Andrewes or Dearmer in the first place. It begs the question: does the Ordinariate even have a purpose anymore? Or was it just a fanciful idea? A dried up old onion, I think. Doomed to failure. May the money run out, and all interest, and that soon!
Posted by Patrick Sheridan at 1:00 pm
Email ThisBlogThis!Share to TwitterShare to FacebookShare to Pinterest