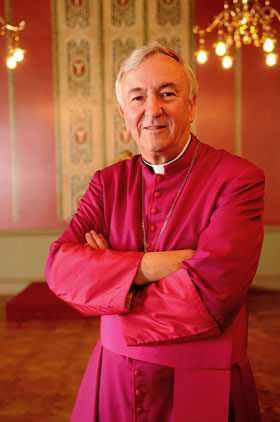 It seems that archbishop Vincent Nichols is to be made a Cardinal in the next consistory. What took them so long? Protocol? Or was it because Benedict simply didn't like Vinnie, with his wishy-washy disposition and halting rhetoric? Or has pope Bogroll seen the light? Vinnie certainly isn't very popular among the Traddies, so news of this promotion must have raised a few eyebrows. I think he's a harmless idiot, to be honest. I remember laughing my socks off when I watched the address he gave in Westminster Abbey before (or after) +Cantaur's address during the visit of pope Benedict. It was comparatively weak and could have been summed up thus: "err, thank you for the, errr, umm, you know, this historic, erm, occasion [looks at his watch]; and, errr, we're very touched by this, gasp, reception." You can imagine how wearisome it sounded in his thick Lancashire diction. I mean, really! He hasn't even had elocution lessons! Did he go to Oxbridge? Sometimes I wonder if he has a real theology degree. What would Evelyn Waugh say?
Posted by Patrick Sheridan at 6:39 pm
Email ThisBlogThis!Share to TwitterShare to FacebookShare to Pinterest