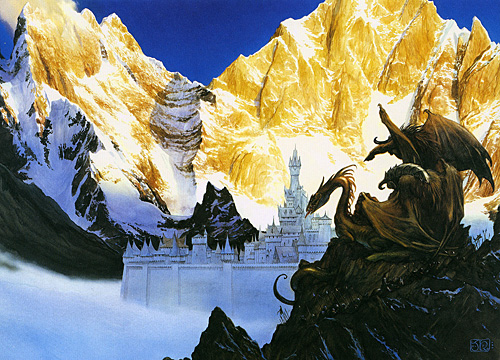 Then was a great council held between the Two Trees at the mingling of the lights, and Ulmo came thither from the outer deeps; and of the redes there spoken the Gods devised a plan of wisdom, and the thought of Ulmo was therein and much of the craft of Aulë and the wide knowledge of Manwë. (The Book of Lost Tales vol.I cap.IV).

The equivalent passage in The Silmarillion goes:

Manwë sat long in thought upon Taniquetil, and he sought the counsel of Ilúvatar. And coming then down to Valmar he summoned the Valar to the Ring of Doom, and thither came even Ulmo from the Outer Sea. (cap.III).

These quotes concern the council of the Valar before their assault upon Melko(r) in ancient days. In the Lost Tales the gods held their council because many of them were concerned about the great violence of Melko upon the Great Lands; forests groaned and snapped, the fire of the mountains was mingled with the sea, unquiet phantoms from Utumna escaped and roamed the world "turning the dark into an ill and fearful thing, which it was not before" (a motif which is echoed in The Lord of the Rings, if you remember Bombadil's remembrance of the "darkness under the stars when the night was fearless"), Melko spouted to heaven from a fire-torn hill, etc. In The Silmarillion, however, the Valar held council because of the news that Oromë brought about the coming of the Quendi and their war against Melkor was undertaken on their behalf though, of course, Aulë was still concerned about the "hurts to the world which must come of that strife," which must be a deference to the earlier account.

The Lost Tales are written in a very grandiloquent style which was abandoned by Tolkien in the '30s (along with the Gnomes and the tradition of Ælfwine of England). "Of the redes there spoken," for example, it's like cream over strawberries, draughts of the finest ale. I have missed Tolkien.

Art: John Howe. It depicts the assault of the armies of Morgoth upon the Gnomish (or Noldorin) city of Gondolin. This happened many thousands of years after the events described in the post but I rather like the painting.
Posted by Patrick Sheridan at 9:00 am
Email ThisBlogThis!Share to TwitterShare to FacebookShare to Pinterest