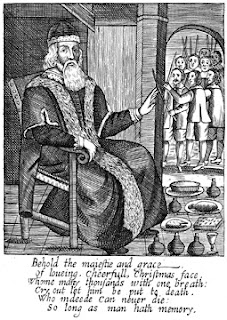 "Behold the majesty and grace,
of loving, cheerful Christmass face."

The Armenians celebrate Christmass to-day so I thought I'd say something about St Nicholas who, at some point, became confused with the Lord Christmass of English legend.

All that we know of St Nicholas is legendary, and not even that he was bishop of Myra during the reign of the Emperor Diocletian (and that he was more than likely to have suffered a martyr's death) can be confirmed historically. Diocletian was Emperor from A.D 284 to 305, and spent most of his time in Asia Minor (or thereabouts), having ingeniously devised a Tetrarchy of a secondary Caesar and a pair of Augusti to safeguard the imperial borders in the West, with himself in sole charge of the East - he visited Rome for the first time in 303, twenty years into his reign. If St Nicholas was indeed bishop of Myra, and a worker of miracles, then it's hardly surprising that records attest to his persecution, torture and imprisonment; for Diocletian instigated his infamously harsh systematic persecution of Christians in the Empire in 303. When Constantine the Great acceded in 306 he was too busy with battles in the Rhineland and Italy to devote any time to a bishop imprisoned in Lycia but when he decided that Rome wasn't central enough to manage an empire that stretched from the Rhine to the Euphrates, Asia Minor (modern-day Turkey) became a Christian land much like the rest of the Empire. St Nicholas must have been released some time after 311, the year of the Edict of Serdica (which granted freedom of worship and congregation to Christians). He is said to have attended the great Council of Nicaea in 325 but St Athanasius (the Sydney Smith of his time), who knew all the bishops, fails to mention any "Nicholas of Myra." His existence, much like the existence of a good pope, depends entirely upon the belief of pious women.

In England the festival of St Nicholas (6th December) was marked by the election of boy bishops who performed all the rites and offices, except Mass, accoutered with mitre, cope and crozier, and whose authority lasted until Childermass on 28th December. Henry VIII put a stop to this in 1542; Bloody Mary revived it ten years later, and Gloriana finally abolished it some time into her own reign, rendering the Church of England devoid of a sense of humour for ever. The reversal of the rôle of prelate and choir boy was the ecclesiastical counterpart of the Lords of Misrule, or festival of fools, made famous by Victor Hugo's Notre Dame de Paris.

So who is Father Christmass? And whence came the connexion to an obscure 4th century bishop? He was certainly not a fat man who dove down chimneys bringing coal to miscreant children. He was rather the spirit of the season, manifestly a jolly, bearded and wise elderly gentleman in a fur coat who encouraged good cheer (bringing news of Christ's birth) and alms for the poor. During the Civil War, Father Christmass could not be born among the puritan caste, neither could mince pies and holly (being "trappings of popery"), and in 1645, when the Directory of Publick Worshippe was imposed upon the unhappy English, all holydays ("having no warrant in the Word of God") were abolished and out went Father Christmass. Thus wrote John Evelyn at Christmass in 1655:

"I went with my wife to London to celebrate Christmass Day, Mr Gunning preaching in Exeter Chapel. As he was giving us the holy Sacrament the chapel was surrounded by soldiers. All the communicants at assembly were surprised and kept prisoner by them, some in the house, others carried away!"

Thus were the lords of misrule supplanted by the lords of bad-rule in Westminster! Father Christmass returned with the King in 1660, bringing joy to many hundreds of Christians. On Christmass Eve 1660 Samuel Pepys' church was decorated with holly and bay for the first time in seventeen years and on Christmass Day he returned, after morning services, to a dinner of roast shoulder of mutton and chicken and, after napping through the afternoon services (understandably), returned home to play the lute. 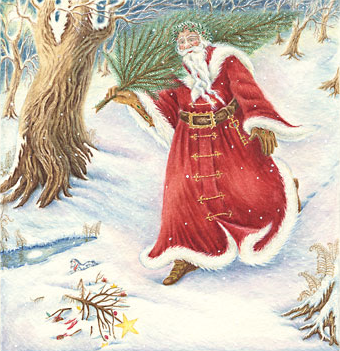 Old Father Christmass survived into the 18th century and beyond but by Dickens' time seems to have become confused with St Nicholas, the giver of gifts. Unfortunately, Dickens is to blame for much of the tat surrounding Christmass that comes down to us from the 19th century. A Christmass Carol, with Scrooge's promise to keep Christmass the whole year, has done nothing but flatten the period from October to January. But there are some authors who have kept Old Father Christmass as he was from Chaucer's time, and even created their own legends about him. In 1920 J.R.R Tolkien began the composition of his Letters from Father Christmass, written to his own children, which contain many adventurous stories about goblins, elves and the North Polar bear. C.S Lewis introduced his Father Christmass figure in The Lion, the Witch and the Wardrobe. Both figures represent the synthesis of both the lord Christmass of English folklore and St Nicholas, the lord of gifts. The same can be said for the figure introduced as "Old Father Christmass" in Ursula Moray Williams' book The Good Little Christmass Tree. It's certainly interesting that in Narnia Father Christmass claimed to have been banished by the White Witch, so I wonder if that's a polite nod to the unhappy rule of the Major Generals?

I always rather liked Father Christmass. It's such a shame he has been ruined by corporate greed and secularism. He remains the spirit of the season but has become for many the spirit of avarice, a wolf in sheep's clothing. These days "Santa Claus," an American conflation, is used by retail giants to manipulate long-suffering parents into buying their children lots of expensive and useless things, to the ruin of their taste. I daresay that when Old Father Christmass does visit towns like London and Paris he sees all the signs of festivity, merry-making and indulgence but few signs of any holyday, or charity, or the warmth that succours as we recall the birth of the Saviour. Sometimes I wonder which is worse, the unhappy Christmasses of the Interregnum or that which we all suffer annually in these latter days?


Nevertheless, I wish you all a belated Merrie Christmass!

Images: I fell in love with Gillian Tyler's illustrations of Father Christmass when I was very little. They remain my favourite depictions of the spirit of the season to this day. They encapsulate all the qualities that Father Christmass represents, of benevolence, wisdom and good cheer; and they're not tacky. Go elsewhere for an image of Father Christmass and you find rubbish! I found the other image on Wikipedia. It's from the 17th century account of the Trial of Father Christmass. The poem is beautiful.
Posted by Patrick Sheridan at 9:00 am
Email ThisBlogThis!Share to TwitterShare to FacebookShare to Pinterest