The season to be...what, exactly? 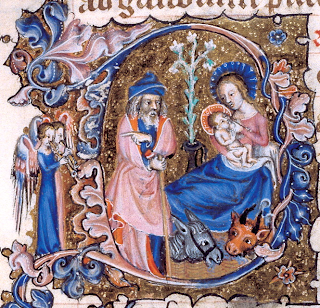 This was going to be another cynical rant about how Christmass has gone down the drain and in its place has been erected the monstrous pillar of corporate greed and ignorance...but never mind; we've all heard that story. At work yestermorn a woman complained not only that the close of business was five o'clock but that we are going to be closed on St Stephen's Day as well. "Well, everywhere else is open," said she. I wanted to hit her, the stupid bint! On that note, Quentin Crisp once said that love is the extra effort we make with the people we do not like. I wonder, does our charity extend to the greedy and ignorant as much as to our friends and family? It's a tough one.

Anyway, I feel rather serene now that I have had my lunch, watched Her Majesty's Address and had copious amounts of champagne. I could even face church. I did try to watch the festival of Nine Lessons from King's but switched off when they brought on a woman to read. Nobody ever gets it right these days, and as for carol services in place of liturgy...don't get me started! It's like eating strawberries in the winter; round hole, square peg.

I think I shall go and read The Hobbit now. My mind is hungry for adventure, and for some of Beorn's honey strangely enough.


Wishing you all a very Happy (new kalendar) Christmass!
Posted by Patrick Sheridan at 4:17 pm
Email ThisBlogThis!Share to TwitterShare to FacebookShare to Pinterest