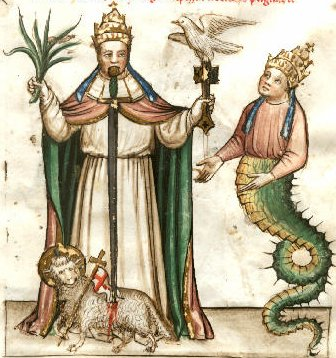 So then because thou art lukewarm, and neither cold nor hot, I will spue thee out of my mouth. (Revelation 3:16).

The other day I was chatting quite gaily with a Muslim girl about the Bible and Holy Orders. Another girl at the table said that she didn't know that I was Christian and raised her hand so as to "high five" me. I proceeded to give this other girl my "sod off" look and carried on talking to the Muslim. You see, the other girl styles herself "Christian." No, I don't think she is a Papist but she is clearly one of those wishy-washy liberal types who would sell her soul to Starbucks rather than even consider covering her head on Sunday morning. I would gladly talk to the Muslim about the Christian faith; not because I exemplify Christian moral principles (does anyone?) but because I'd rather talk to someone ignorant of our faith, from outside, than to someone who dares to call themselves Christian and yet violates the heart of Christianity. There are no grey areas. Truth is not relative. And liberalism is not synonymous with compassion and understanding.

On the subject of being lukewarm...to those of you who do not set a very high store by the Petrine ministry as it is exercised to-day, I have some questions. What do you think the pope really is? What does he represent?, if not Christ Himself? Who is the pope? Whom does he really serve? If you are in schism with him, why do you not remove his name from the Canon? Do you suppose that he is a harmless old man, dressed in white and leaning on a staff? If so, what is this harmless old man capable of? Can he not be compared with a pendulum within the Roman communion? Have not successive pontificates shewn that the incumbent of the Roman see can affect, in a profound way, the life of the Roman communion to the remotest parish? John Paul II liked travelling, and so popes travel everywhere now, attracting huge crowds so as to seem even as Christ among the thousands. Benedict XVI liked pseudo-Baroque tat and liturgy, though he can have had no sure knowledge of it, and so his lasting monument will be Summorum Pontificum. (I don't doubt there will be cries of santo subito from Traddieland when he finally kicks the bucket...most other recent popes have been canonized, why break with "tradition?").

Who would thus exalt themselves in Christ's Church? Why would you not despise such a man? Are you afraid of looking ridiculous in the eyes of the world? Perhaps you've already burnt the bridge leading to respectability and you think that by condemning monstrous tyranny in Romanism, you might lose even more? Well, banish your respectability; I have! Except a man declares the Bishop of Rome to be Antichrist and of Satan, he shall be in peril of Hell Fire. You cannot be indifferent about the pope. Either he is Vicar of Christ, or he is Antichrist. History has shewn that he is by no means of Christ, having been the continual sower of schism and destructive of tradition, and so, logically, he must be of Antichrist. If you do not see this in these terms then you are lukewarm. I will spue thee from my mouth, forsooth!
Posted by Patrick Sheridan at 9:00 am
Email ThisBlogThis!Share to TwitterShare to FacebookShare to Pinterest