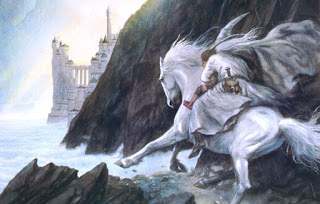 
I believe the reason for the love of guns in America is spiritual/psychological, rooted in fear and lies. The people of the thirteen colonies were hyped up to believe that "tyranny" was imminent (hyped up by a wealthy upper class that stood to profit more by paying less taxes and not being limited by the Crown from settling behind the Appalachians). They bought the hype and believed that only bloodshed and the sacrifice of sons—even the apparent bulk of Christian ministers cast off "render unto Caesar" in favour of violence against the state and enemies. Then, the worst possible outcome for the American psyche: they *won*! Because they won, their faith and hearts clung to that which they believed gave them victory: 1) abandoning diplomacy & peace in favour of violence, 2) guns, &c. This solidified a deep spiritual and psychological attachment in the national psyche and kept alive by the education system as part of the national mythos. It has kept alive (as necessary) the often irrational fear of imminent tyranny. It has made "war" sacred and the sacrifices of soldiers beyond question. You can question any religious dogma, but as soon as you question whether soldiers' sacrifices were right or not, you've crossed the line.

I'm not keen on guns myself. My father owned an air rifle once upon a time but I have no especial fondness for guns, and would probably fear to hold one, let alone fire a bullet. Having said that, I do sometimes envy the protection Americans have under the "second amendment." Now, you can argue either way on this issue. You can say that the second amendment is centuries out of date and was relevant only to colonial times. Or you can say that it's too much of a sacrifice to depend entirely on the police for personal and domestic security. I remember only too well the "riots" we saw in England in the Summer of 2011, during which our police "service" substantially failed at their job and residents were compelled to take up their own defence. All too often nowadays we read stories of burglars suing home owners for accidents or injuries sustained whilst they were breaking the law; the tired line of "taking the law into our own hands," and so on. Who does the law belong to? Where does Justice come into it? All of this comes of ascribing to the State too much and too many of our own responsibilities, and by which we end up losing most of our liberties. Sex education in schools is a perfect example. At the other end of that spectrum we have "gun control," which is a cosy, pansy idea that precipitates our abject humiliation before the state and whatever callous, opportunist intruder who thinks it's worth his while to come into your home, steal your possessions and murder your family.

What did Faramir say again?


"War must be, while we defend our lives against a destroyer who would devour all; but I do not love the bright sword for its sharpness, nor the arrow for its swiftness, nor the warrior for his glory. I love only that which they defend: the city of the Men of Númenor; and I would have her loved for her memory, her ancientry, her beauty, and her present wisdom. Not feared, save as men may fear the dignity of a man, old and wise."The Lord of the Rings, Book IV, Chapter V.

Posted by Patrick Sheridan at 12:20 pm
Email ThisBlogThis!Share to TwitterShare to FacebookShare to Pinterest