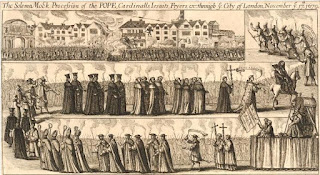 Since we are faced with a civilization of increasing faithlessness, disguised as "inclusion and diversity," and wave upon wave of Muslim migrants, many of whom are undoubtedly Al-Qaeda and ISIS affiliates, I see no real hope for the preservation of Christianity in these Isles and on the Continent. I would therefore extend to Mr Putin in Russia an open invitation to invade and annex Europe to Orthodox Russia, and call upon anybody willing to assassinate the pope of Rome on the grounds of his despicable support for the new world order and for representing an institution fraught with corruption, superstition and riddled with falsehood. Destroy the Papacy as Napoleon and Garibaldi would have done! Let us begin a new Glorious Revolution and rejoice in the liberty of the Gospel; turn tyranny into kingship, and faction into faith. Let us pray for a return of the Emperor; not some German prince of a disheveled house but a true heir to bl. Constantine XI, or of St Nicholas II.

There is no hope left in the West, only the doctrines of inclusion, diversity and multiculturalism. Since the pope and our whole political class (save a few renegades) are on the side of these pernicious doctrines, inherently anti-Christian, put them out! Let them be scourged and humiliated; driven forth like cattle. We can either sit idly by as we become aliens in our own land, or do something. A new crusade, a glorious revolution, a reconquista. Something needs to happen or we will become thralls, more so than we are now. Something must happen, pray God.


God save The Queen!
Posted by Patrick Sheridan at 12:29 pm
Email ThisBlogThis!Share to TwitterShare to FacebookShare to Pinterest