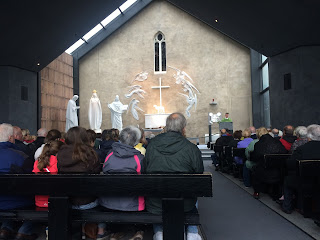 As Erasmus went to Walsingham in 1513 so my uncle and I went on a mock pilgrimage to Knock on Sunday 20th September. It was a flying visit on our way back to Donegal, forty minutes or so, so I didn't explore the place properly. I have to say I went expecting the worst and I was not disappointed. It was about midday when we arrived. As we got out of the car the heavens opened and a heavy downpour started so my uncle and I went into the parish church to look around. There were plenty of people in the pews but there was no mass going on (I won't bother to try and amplify the word "service" or "liturgy" by implying that anything other than mass or exposition goes on there). The church is like most other 19th century papist churches I've seen in Ireland, with an altar piled high with pillars, shelves and candles - that is, all the things that should not be on an altar - and the usual gimcrack of plaster Josephs and Marys. The church was carpeted so I can't imagine people sing much there. 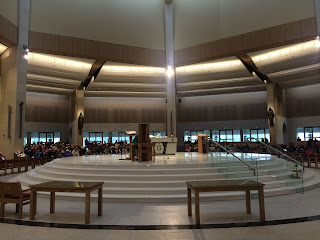 Presently we went out into the rain. Some people reciting the rosary walked past us and we saw queues of people waiting for Mass cards in various booths. We then went into the shrine, outside of which I saw a square of stone which people were touching and with which people were blessing themselves. The shrine, like the basilica, is a modern building made of plain glass and concrete, completely lacking in decoration, with black wooden benches and a sense of "modernism," an obsolete albeit all-encompassing word which can only describe the tasteless, valueless and ugliness of most modern churches. Mass was being celebrated therein by an American priest from Wisconsin. It wasn't as bad as the "wiggly worm" church in Stranorlar but matched the architecture, even to the use of Eucharistic Prayer II. For much of the mass I was staring intently at the white statues and altarpiece which depict the vision that took place there in 1879. I recalled the description given me by a friend of mine, that the vision was very uncharacteristic of 19th and 20th century visions. The presence of St John the Evangelist in posture of preaching, for example, and the Paschal Lamb. My friend thinks this adds credibility to the vision but I am not so sure. Of course I am open to remonstrance from those who know better. 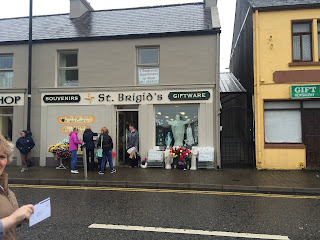 Look at the "Jesus" in the window. Doesn't the head look too big?

After mass we went to a kiosk and paid a euro each for a candle. These the man took, lit up and placed by a wall. We then went into the basilica, where another mass was going on. I took one look around the hideous, empty place and walked out. I said to my uncle: "I think we've seen enough for one day," and so we went to the souvenir shops. Outside of these were baskets of holy water bottles in the shape of "our lady of Lourdes," among other tacky and useless merchandise. I spoke to an elderly woman with strawberry hair who was sorting out the holy tea towels about the shrine, and she described a miracle that took place on her mother-in-law's deathbed thirty-two years ago. She had taken holy water from Knock and touched her mother-in-law's lips, and the miracle was that her mother-in-law, who was Presbyterian, licked her lips. I asked if the holy water had saved her mother-in-law's life but she said that it hadn't. I'm sure there were many pilgrims at the shrine with similar miraculous stories to tell. 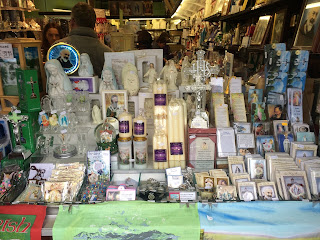 Back in the car my uncle told me the story of the family trip to Croagh Patrick a year ago. Daniel, my young cousin, had suggested setting up a holy shop at the base of the mountain selling various healing rocks (all dug up from their back garden) and plastic saints, and that it could be a very lucrative form of income for them. I daresay it could be. I mean, if the tat shops at Knock selling Padre Pios, miraculous medals and sacred heart mugs were relying on me for business they'd go bust. Still, de gustibus non est disputandum. What makes me angry is the idea that these credulous and unsophisticated people go about with the temerity to think that their religion of plastic holy water bottles is the one and only true faith, outside of which there is no salvation. Jesus nowhere said: "no one cometh to the Father except through tat." I'd rather a cold cup of Protestant truth than a crunchy bowl of TLM cereal with a papal croissant. 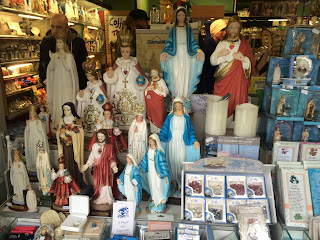 A word on statues: Contrary to popular misconception, I do not have any theological objection to three dimensional images. Christianity is an incarnational religion, after all. I myself own a white alabaster bust of St Mary and the Christ Child, which is in a modern classical style. My favourite church is the Saint Chapelle, which is full of statues and a miracle of stained glass. My objection is to the propriety of depicting Christ the Saviour, His blessed mother or any of the saints, on an obviously inferior object. And that goes for anything ecclesiastical; vestments, liturgical books, language, everything. If it is not the best then it is rubbish.

I may go back to Knock but the likelihood is I won't. What do you think? Have you been to Knock? What were your impressions? Comment below.
Posted by Patrick Sheridan at 3:04 pm
Email ThisBlogThis!Share to TwitterShare to FacebookShare to Pinterest