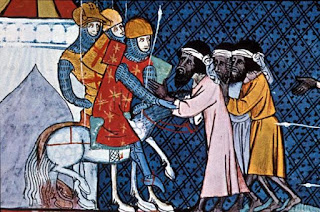 This was depressing reading. A sample:


"Most recently in Sweden, two small families of Christian asylum seekers from Syria were harassed and abused by approximately 80 Muslim asylum seekers also from Syria.
"The Christians and Muslims—described by one Swedish newspaper as “fundamentalist Islamists”—resided in the same asylum house.  Among other humiliations, the Muslims ordered the Christians not to wear their crosses around their necks and not to use communal areas when in use by Muslims.
"After continuous harassment and threats, the Christian refugees who had managed to escape the Islamic State left the Swedish asylum house “fearing for their own safety.”"

I have nothing especially against Muslims. The few whom I have known in my short life have been reasonable, peace-loving people who have taken a genuine interest in my beliefs which, as you know, I love sharing. And contrary to the popular, hysteric misconception among Westerners, they are not all goat-eating, pyjama-wearing, bearded, nihilistic lunatics who despise liberty. But it's unfortunate that there is a strain, dormant until recently, in their religion; a Qur'anic predicate in fact to wage a religious war against us, for either real or contrived grievances. I don't blame them! America and its deluded allies have caused nothing but problems for Muslims the world over, and American military intervention in the Muslim world actually justifies everything Osama Bin Laden ever said. (I confided to a friend of mine recently that I'd never admit this publicly, but I'm passed caring what people think. I'd like to have met Osama Bin Laden. Just think! A Christian and a Muslim united, despite the sundering gulf of our respective beliefs, by our common hatred of Israel and America!). 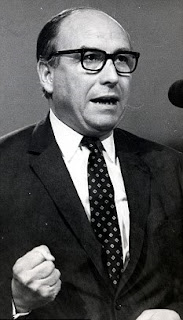 Roy Jenkins, responsible for many of the pestilential reforms that dethroned Christ in British politics.

Foreign policy is one thing, domestic policy is another, but in neither have we worked in our own best interests. In fact, for the past fifty years successive parliaments have consistently pursued policies that have put a noose around our necks that over the years have tightened considerably. I can't speak for America but the left-wing liberal reformers who have run the United Kingdom for the past fifty years have, with deliberate intent, destroyed everything that was exemplary about this once great, respected and feared nation and empire. Our education, police force, drug laws, the off-shoring of manufacturing jobs, de-industrialisation, no-fault divorce, race-relations, theatre censorship, Sunday trading, abortion, capital punishment, the family, state benefits, Europe, and many things beside are just some of the subjects that have been visited upon this country and changed it for the worse. Mass immigration is my bête noire these days, a deliberate policy that has demographically transformed the country forever. All these things, which have their uttermost source in creeping apostasy, have turned the British people into a cynical, greedy, entrepreneurial, secular, lawless and fornicating society with no sense of nationhood, no common religion, and ruled by career politicians who don't care twopence what their constituents think. I'll never forget the words of Alastair Campbell, one of Tony Blair's henchmen, "we don't do God." That's as sad, but frank, a perspective of where we are in the world, and that was more than a decade ago.

But Muslims are not as faithless as we are. One of the common complaints, and indeed it's one of my own, about the Muslim communities that live in the UK is that they don't integrate. But given what I've just said about the kind of society we have created, it's a very naïve expectation to make of them. I read on another blog recently the story of two fat, butch lesbians kissing in public, and a Muslim mother shielding the eyes of her two children to spare them the sight. There are two things to say about that: either the lesbians should keep their unnatural attachment clandestine, or the Muslim woman should not have covered the eyes of her children. It reminds me of that saying attributed to Mrs Thatcher: "there's no such thing as society." She probably meant something else but she's absolutely right. And the reason she was right is because all the things that are the backbone of a society and civilisation; that is a common religion and morality, the family, a common language, a common history, heritage and culture, have been systematically broken by the battering ram of secularism, the immigration of millions of foreigners of differing languages, cultures and religions and skin colour to our shores, and positive discrimination in all public services and institutions on the basis of minority status, which is practically the doctrine of political correctness. All these things have undermined and disunited the British people. I would say that it must stop but it's too late for that even if it could be stopped. 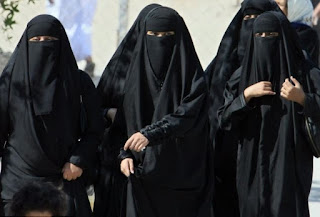 I find it offensive, and a bit intimidating actually. But this is the norm in Oxford Street, particularly in Selfridges, and places like Woolwich. Where are the English women?

The lesbians and the Muslim mother represent people of all shapes, sizes, colours, faiths, creeds, genders (all twenty-six of them), sexual orientations, abilities, handi-capabilities, &c. who are already here. With the imminent prospect of swarms of migrants from the Muslim world coming to our shores within the next few months, you can be quite sure that there will be more, and uglier, confrontations between the sexual deviants promoted by our supposedly rule-of-law society, and the religious conservatism of practising Muslims. But it won't stop at sexual deviants. You will process on Palm Sunday through a neighbourhood of devout Muslims at your peril. You will be seen buying pork chops or wine in the supermarket and you may be attacked on the way home. And then there are the inevitable terrorist attacks; yet more innocent peoples' lives destroyed. I say inevitable because it is blatantly obvious to anyone with eyes to see that many of these putatively "desperate" migrants are affiliates of ISIS or Al-Quaeda. And we can accurately predict the response of our pompous, ineffectual and fatuous political class. They will repeat the usual lies about "Islamism" having nothing to do with Islam and then call upon "Muslim community leaders" to curb the thoughts and sympathies of the male members to root out "extremism." At the same time, they will do nothing to increase our security and actually deter our enemies from committing further atrocities on British soil. But what they will do is accelerate and increase the Orwellian surveillance society in the form of more cameras, more interference in private communications, mandatory I.D cards, and generally crippling most of our liberties. Orwell might have been forty years too early but by 2024, riveted into the home of every family in the UK, there will be a one-way television screen through which we will see nothing - which might be an improvement! - but through which we will be watched by Big Brother.

And what of the private taboo of Christian faith? I think all of us are too keenly aware of the relentless attacks on Christianity in this country. The banning of public displays of Christ's Holy Cross, or something as innocuous and charming as a Nativity display; renaming Christmass and Easter so as not to offend atheists and faith minorities; the Sunday trading laws that clearly undermine the sanctity of the LORD's Day; the "rights" of false gods and false religions, alternate lifestyles, people of no religion, &c. In my experience, Muslims take Christians seriously when Christians take their religion seriously. What they are troubled and disturbed by (as indeed am I) is people who have no religious opinions whatever; when people come to any disposition without a religious basis. For years this has been public policy. In the succinct words of Mr Campbell, "we don't do God." But what of "the Church by law Established?" That's a phrase that goes back to the Canons of 1604 but has almost no significance to-day. A few Anglican Bishops may sit in the House of Lords but the Church of England has supinely allowed this national apostasy to come to pass. But does the Church of England bear the whole burden of this responsibility? I don't think so. We all do, or at least our fathers and grandfathers did. And the national apostasy, and the common Christian impotence to affect public policy in this United Kingdom, whose head of state is a Christian crowned in an explicitly Christian ceremony, shews most clearly the absolute failure and hypocrisy of secular democracy. And its insidious origin. No political party manifesto ever advocated the abolition of Christianity; no Prime Minister or Home Secretary ever stood up in the House of Commons and declared his intention to systematically undermine Christian principles. Instead the secularism in which all public services and institutions are enshrined has come about by the slow, incremental tide of reforms, laws, decrees, treaties and the permissive society. And it's critically because of secularism, the faithlessness of our political class, that we have absolutely no idea how to engage the Muslim world in what is obviously a religious war for them. Or indeed how to deal with the ineluctable tide of unwanted, unwelcome migrants flooding the Continent. Muslims the world over, in the Middle East, the United States, Canada, Australia, France, Germany and here in the UK, are just as devout and serious as they ever were; even as we were a century ago. We, on the other hand, have replaced the Word of God with lies; faith with sentimentalism; and Christian benevolence with subservience.

I can only end too long a post by saying that we are doomed; we are irrelevant. We have been tightening the noose for fifty years. When these migrants come they will kick away the stool and that will be it. Western Civilisation hung from a gallows of its own making by the rope of its own hubris and faithlessness. Then comes the triumph of Islam in Europe, the land of old Christendom; and not by military conquest but by the even more effective means of just moving here in large numbers. 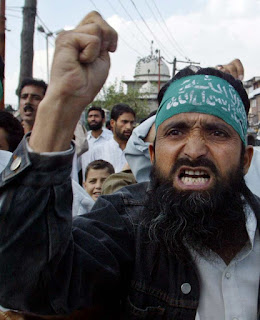 Merciful God, who has made all men, and hateſt nothing that thou haſt made, nor deſireſt the death of a ſinner, but rather that he ſhould be converted and live: Have mercy upon all Jews, Turks, Infidels, and Hereticks, and take from them all ignorance, hardneſs of heart, and contempt of thy Word;
and ſo fetch them home, bleſſed Lord, to thy flock, that they may be ſaved among the remnant of the true Iſraelites, and be made one fold under one ſhepherd, Jeſus Chriſt our Lord; who liveth and reigneth with thee and the Holy Spirit, one God, world without end. Amen.

We can either pray even so or just give up and become Muslims.
Posted by Patrick Sheridan at 9:00 am
Email ThisBlogThis!Share to TwitterShare to FacebookShare to Pinterest