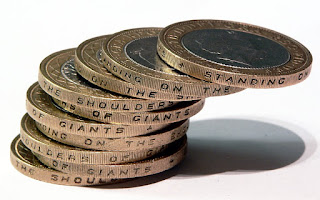 In chapter eleven of The Naked Civil Servant, Quentin Crisp discusses how society's attitude towards marketing had changed considerably over the course of his life. "In that happy time when I first became a free-lance artist," he says, "advertising was a disgraceful trade. The confession that it was your chosen profession was received as though you had said, 'I'm in burglary.' It was run by businessmen who were presumed to have failed in more reputable concerns and staffed by artists and copywriters who felt that they were exiles from fine art and literature. Their function was to think up the atrocious pictorial and verbal puns, jokes and riddles (Sheila Dore drinking Oxo) that appeared on the hoardings...

"In the 'sixties, if you told anyone that you were a practitioner of advertising, you would still be treated as though you had said you were in burglary, but morality had changed. The increased scale of your operations would lend you respectability. Who, except possibly the Postmaster General, would refuse to shake hands with one of the Great Train Robbers?"

I thought of these observations as I made a few of my own this week, and not just about marketing. If working in food retail affords me any benefit at all, if it can be so considered, it's seeing up close just how far we have declined as a civilisation. I can be forgiven for going about with an air of superiority and resentment, especially when around this time of year I witness a supermarket, which is already an avaricious corporate chain, turn into a cash and carry. This morning (at the time of writing, 23rd December new style) my store opened at 5am. The customers poured through the doors and fell upon the stock like vultures. At the entrance to the store were stacked ten pallets of Maris Piper potatoes, which, in my view, seemed to compromise fire safety. The aisles were congested with excess stock; mostly cases of Prosecco, spirits, tubs of chocolates, bottles of Coca Cola, and other seasonal fare. But the store itself was filthy. There were empty pallets lying everywhere, cages of stock and cardboard just abandoned in the aisles, and the floor hadn't been swept or mopped. There were spillages and leaks everywhere, just left with a yellow cone. The online shoppers were still picking the stock after 9 o'clock, by which time the store had become so busy with customers that free movement was checked. This inevitably led to complaints, from both senior management and customers; the former apparently not seeing the gross stupidity in opening the store one hour after picking customer orders in excess of 50,000 items commenced; the latter frustrated that the pickers' trolleys were blocking their access to the excess stock. Overtime was "expected," and the department's overbearing and manipulative team leader went about asking people to stay, in addition to the constant messages we received on our hand-held terminals complaining that we were behind schedule and requesting that we "pick up the pace."

I was largely oblivious and went at my own pace. I only became angry when a customer complained to me that: "this is ridiculous;" presumably because my trolley was in his way. I simply said: "I'm sorry," in a nonchalant way and moved on. But I spent at least the next twenty minutes musing on exactly what he found ridiculous. Was it that he had arisen from his bed at stupid-o'clock and was complaining because he was tired? Was it because he found food shopping at that ungodly hour distasteful? Was he perhaps put off by the contents of his own trolley, which was, for the most part, ready-made party food and cheap lager? Perhaps what he found ridiculous was the pervading climate of impetuous greed that had driven him thither? After turning all these things over in my mind for a while I shrugged it off as nonsense. As I looked into his eyes I saw the same disease, the same universal malady as I saw in everyone else around me. And so the answer was simple. I was a stumbling block, an obstacle in his path to undeferred gratification. I thought then how ridiculous he was and I saw the emptiness of his life. At a guess, I'd have said he was 35 years old and by his voice I could imagine the football on the television, the cans of Stella Artois and the promiscuous, gutter-mouth girlfriend to fornicate with afterwards. A common, secular young man, of the kind that corporate marketing and merchandising are designed to impress. I can see his Saturnalia as I write this now; a protracted, gormless and meaningless celebration; and a celebration of nothing but greed. No doubt he's been buying mince pies since November (which go stale by mid-December), and he will have decked his halls with tat and folly. He's probably been wishing his friends a "merry Christmass" all month. Perhaps his gutter-mouth will scold him for "ruining Christmass" if he doesn't buy the right wrapping paper? And so, he goes about the cash and carry with his trolley, picking up the first things that catch his eye on the shelves, or stacked to the ceiling; buying too much food, food that can't possibly be consumed within one day (for that's all it is), and will be wasted. I can't imagine the gutter-mouth can cook, hence the pre-packed Christmass cake, pre-basted turkey crown (what happened to the rest of it...), ready-made mashed potatoes, pre-diced carrots, instant gravy, &c. Slovenly...And to procure all this rubbish he's prepared to get up at 4am, drive to the cash and carry and has the temerity to complain that I'm in his way!

These are just general complaints and observations about the vulgarity of December. Others have done this better than me but it seems to me that marketing Christmass is, next to Charles Dickens, the most pernicious influence upon the month of December than any other. The general public are so impressionable that when something is provided, they buy it. When something is advertised, they go out looking for it. Morality and propriety are irrelevant, as is a sense of truly seasonal preparation, expectation and advancement as opposed to this flattening out of the year. This is why people buy strawberries in the winter. It's also one reason people don't save money anymore but make recourse to credit cards; a situation facilitated by low interest rates. Ever noticed that shop-bought flowers have no scent? We live in a perpetually unripe society. But, as Quentin Crisp observed, morality has changed. I sometimes wonder whether people like me are the modern descendants of 17th century Puritans with our attitude towards Christmass. People have accused me of being a "Scrooge" plenty of times. But I have nothing against making merry. I toast the Lord Christmass with my port and mince pie and I am deeply fond of a traditional Christmass tree. But I am confident that my readers will share my disdain and mistrust of what practitioners of advertising have turned Christmass into.

I'm sorry, I wrote this post in haste and I am not in the best mood. I wish my Anglican and Roman Catholic readers all the fun and joy of new kalendar Christmass!
Posted by Patrick Sheridan at 3:50 pm
Email ThisBlogThis!Share to TwitterShare to FacebookShare to Pinterest