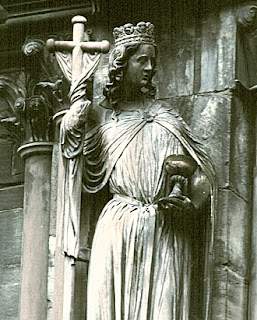 Ecclesia in triumph, in beauty and majesty.

I'm sure you've seen by now the latest watery, inter-/intra-religious nonsense from Rome. It's called "The Gifts and Calling of God are irrevocable," an obvious nod to Romans 11:29, and the document expounds the history, rationale and long-term ends of inter-religious dialogue with the Jews.

I am concerned by this document, deeply concerned. While the document makes clear that: "the text is not a magisterial document or doctrinal teaching of the Catholic Church," it does make extensive use of past and recent papal pronouncements to advance its case which can be considered magisterial. And in any case recent developments, such as this, in the Roman communion have repeatedly undermined the "magisterium" to the extent that doctrine can be pushed into a dusty old corner and covered up, like so much embarrassing furniture, to safeguard the sensitivities of our "elder brothers," or the secular media, or whoever else Rome is seeking constantly to appease (never people like me). "For whosoever shall be ashamed of me and of my words, of him shall the Son of man be ashamed, when he shall come in his own glory, and in his Father's, and of the holy angels." Luke 9:26.

I have read the sixteen pages in detail. You can read them here. As usual with documents like this, it is vague where it should be forthright and forthright where it should be vague, or even silent. It begins with a history of Catholic-Jewish developments since the promulgation of Nostra Aetate in 1965. An evaluation of past Christian "anti-Semitism" in history, accelerated by "the dark and terrible shadow of the Shoah" (more on that later), precipitated the church's revision of its past relationship with the Jews. It goes on:


"From a theological perspective it also makes good sense to link this Commission [the Commission for Religious Relations with the Jews] with the Council for Promoting Christian Unity, since the separation between Synagogue and Church may be viewed as the first and most far-reaching breach among the chosen people."


"'The existence of the State of Israel and its political options should be envisaged not in a perspective which is in itself religious, but in their reference to the common principles of international law.' The permanence of Israel is however to be perceived as an 'historic fact and a sign to be interpreted within God’s design' (VI, 1)."

I find this hard to accept. It seems at once to suggest that the "State of Israel" has no religious significance (for whom? Christians?) but simultaneously has a kind of "permanence" "within God's design." So which is it? Do God's designs interpenetrate with the designs of Zionism, a movement whose pioneers were mostly atheist and whose present champions are American protestants? Or what of Pius X's meeting with Theodor Herzl in 1904? Parasitic worms that burrow through the eyeballs of children in West Africa may be considered to be within God's design but I wouldn't go so far as to suggest that Zionism can be so considered. Furthermore the document uses the noun "Israel" in a seemingly haphazard way; to designate both the historic Hebrew people and the fertile regions of Canaan, and the lands occupied by European Zionists since the Nakbah. Does this vagueness give tacit recognition to Israeli interests in the West Bank?

The document goes on:


"The Sacred Scriptures of the Jewish people are considered a 'fundamental component of the Christian Bible...'"

I trust the writers didn't have the Talmud in mind, but you can guarantee they mean the Masoretic which, in my view, has no standing whatsoever within Christianity, being a mediaeval rabbinic corruption.


"The bonds of friendship forged in the meantime have proved to be stable, so that it has become possible to address even controversial subjects together without the danger of permanent damage being done to the dialogue. This was all the more necessary because over the past decades the dialogue had not always been free of tensions."

Is this a subtle reference to the controversy surrounding the Good Friday Prayer for the Jews? The document nowhere mentions that but I recall in 2007 the reaction of the (Jewish, Zionist) Anti-Defamation League and other Jewish pressure groups who were outraged at the restoration even of the 1960 version of that prayer. So, as usual, secular pressure dictated Roman policy and Benedict XVI composed a new one.


"Over the past decades both the ‘dialogue ad extra’ and the ‘dialogue ad intra’ have led with increasing clarity to the awareness that Christians and Jews are irrevocably inter­dependent, and that the dialogue between the two is not a matter of choice but of duty as far as theology is concerned."

A "duty" as far as new theology is concerned. And since when? 1965? It seems strange to me that this unique insight into so important an area of theology came so late in the history of Christianity. A bit like papal infallibility, I suppose. With the development of doctrine, the implication is that previous generations of Christians were mistaken. But I take it to be axiomatic that nothing can be both new and true! The older praxis carries more weight than the new so this "duty" can go hang as far as I'm concerned.


"Without her Jewish roots the Church would be in danger of losing its soteriological anchoring in salvation history and would slide into an ultimately unhistorical Gnosis."

I am hesitant about ascribing to the pentecostal church a sense of "Jewishness" because contemporary people use the same word of the talmudic, turko-mongoloid people who have no part in the biblical Twelve Tribes.

Under "The special theological status of Jewish-Catholic dialogue," the document says:


"Judaism is not to be considered simply as another religion; the Jews are instead our 'elder brothers' (Saint Pope John Paul II), our 'fathers in faith' (Benedict XVI)."

The document is careful to ascribe sainthood and blessedness to John XXIII, John Paul II and Paul VI respectively but where other (real) saints have been quoted, namely Sts Paul of Tarsus, Augustine of Hippo, Gregory the Great, and Bernard of Clairvaux, they have simply been quoted without a title. One wonders whether this is deliberate and has something to do with their particular attitudes towards either the status of the Law under Grace or the Jews themselves as opposed to modern popes. But I'm afraid, as in so many other instances, the Qur'an-kissing pontiff is wrong, exactly wrong, in his view that modern Jews are our "elder brothers." Even assuming that modern Judaism was in genuine continuity with the Temple, the sacrificial priesthood, and so on; Jews do not recognise Our Lord Jesus Christ as Messiah. Since Christian teaching must be tested first by the New Testament, which says: "Who is a liar but he that denieth that Jesus is the Christ? He is antichrist, that denieth the Father and the Son;" I wonder that the pope, the self-proclaimed oracle of Christ on earth, was so ashamed of his master in heaven! Yea more, the notion that modern Jews, even Sephardic Jews, are descendants of the biblical Twelve Tribes, and therefore arguably our "elder brothers" of the seed of Abraham, albeit well-established in the ignorance of the people, does not stand up to historic scrutiny. Jesus Himself was certainly not  Jewish in the modern sense! Neither were His Disciples, except Judas who was an Edomite Jew. Rather Christ was a direct descendant of Judah, son of Jacob (it's in the beginning of the Gospel according to St Matthew), which ancestry modern Jews do not share; and the Jewish authorities of the time were Christ's bitterest enemies; the "transgressing and lawless nation of the Jews," which: "devised vain things against [Christ]," as it says in Byzantine Mattins for Good Friday. And because the Jews conspired to put Christ to death they have been under God's curse ever since. It is only in this sense that there is a "special theological status" for the Jewish people, that is to say, as the collective tribe of deicidal transgressors in the ministration of death, not the Spirit (2 Corinthians 3:7-11).


"In concrete terms this means that the Catholic Church neither conducts nor supports any specific institutional mission work directed towards Jews. While there is a principled rejection of an institutional Jewish mission, Christians are nonetheless called to bear witness to their faith in Jesus Christ also to Jews, although they should do so in a humble and sensitive manner, acknowledging that Jews are bearers of God’s Word, and particularly in view of the great tragedy of the Shoah."

This is the quote you'll find (in part) in the articles of the secular media. Needless to say, it blatantly contradicts the words of St Paul: "to the Jew first, and also to the Greek," and the constant praxis of the Church. With the qualification "in view of the great tragedy of the Shoah," it's clear to me that, as in secular politics, cultural Marxism (yet more insidious Jewish influence) has infected the Roman communion. It's just as well that this document carries no magisterial authority because I would call upon you all to complain to your bishops about its heretical content, saying that in matters politic, Christians are under no obligation to believe the Jewish victim narrative. In matters theological, it behoves us to believe the Word, which has a clear mandate for supersessionism. See, for example, Philippians 3:3 and 2 Corinthians 3:10-11. 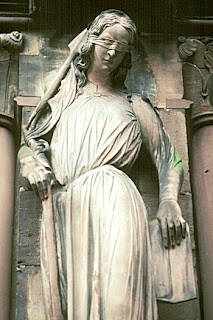 The redundancy of Synagoga, blind and ashamed.

I've gone on long enough. I was going to comment upon the conspicuous absence of any call for an end to Jewish anti-Gentilism and the timely quote: "The principle that Jesus gives his disciples when he sends them out is to suffer violence rather than to inflict violence," which can only be an endorsement of our impending subjection at the hands of our Muslim masters, but I haven't the time.

Aren't you all sick to death of the same wishy washy, relativistic rubbish from the political and religious class? I certainly am! Oh, and before I forget, one of the rabbis (Dr Edward Kessler) present at the press conference at the publication of this heretical document is the founding director of the Woolf Institute which recently called for the expulsion of Church of England bishops from the House of Lords and for a more pluralist ethos in British politics. Sound familiar? I wonder what influence, if any, he had in the drafting of this document? One remembers the fuss traditionalists made about the Protestant pastors present as "observers" at the Second Vatican Council.
Posted by Patrick Sheridan at 9:42 am
Email ThisBlogThis!Share to TwitterShare to FacebookShare to Pinterest