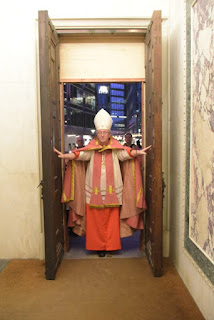 When the Cardinal Archbishop of Westminster cannot even dress himself for Vespers, you know something's terribly wrong. The Cathedral, once a centre of liturgical excellence fit to compare with Westminster Abbey itself, is just an embarrassment these days, in large part due to the actions and ideology of Cardinal Heenan. But doesn't Vinnie look rather silly in bright red and pink! From both an aesthetic and liturgical point of view, Vincent's attire is an aberration. It could almost be a parody of itself. Couldn't you imagine his vestments on shew in the window of a fancy dress shop? The man himself at a Tarts 'n' Vicars do? "What are you, then?" "Oh, I'm the gay prelate!" Whatever happened to the dignity of a winter cassock of rose merino wool, and a violet cope? Bright pink is not a liturgical colour, and to pair it up with bright red just makes him look like a clown. And look at the plywood over the magic door of mercy! O tempora! O for the palmy days of constancy, tradition and dignity!


Posted by Patrick Sheridan at 9:00 am
Email ThisBlogThis!Share to TwitterShare to FacebookShare to Pinterest