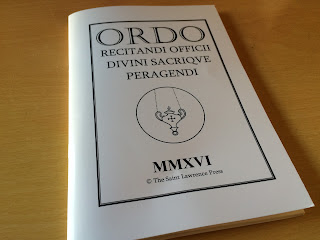 My copy of the Ordo Recitandi published by The Saint Lawrence Press arrived this morning. Do go over and avail yourselves of a copy. As you probably know, I don't actually use the Ordo as such but I like having it as a reference and I would strongly encourage my readers to support the work of The Saint Lawrence Press by purchasing a copy (or two). The ordo itself is the most detailed, accurate and well-presented ordo for use in the Latin Rite published in our time. Its pages open a window sealed shut by the so-called "Extraordinary Form" of the Novus Ordo onto the better half of 20th century liturgy, before octaves and vigils were stripped away and Sundays had more than one Collect. I have taken some pictures of pages that interest me. 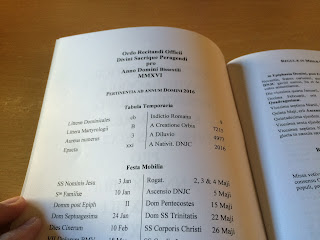 Since the Creation of the World, 7215 years. 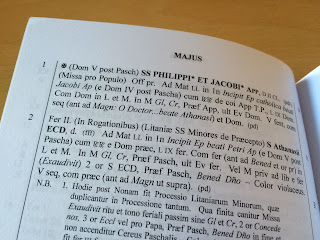 The shibboleth of Liturgiae Causa. The feast that has hideously supplanted Sts Philip and James on its proper, traditional day. Of course, on this page, unlike in the ordines published by such reputable organisations as the Latin Mass Society, the feast matches the day, and vice versa. 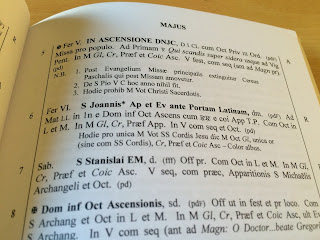 St John before the Latin Gate, as in the 1662 Book of Common Prayer. The Roman Rite can be a truly unifying principle until the changes happen. So much of modern Ecumenism could be corrected by a simple return to traditional praxis. 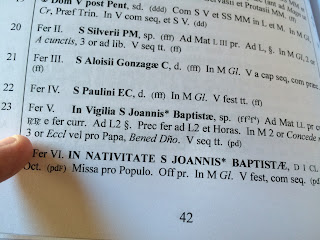 The Nativity of St John the Baptist. In all my years as a traditionalist I cannot recall ever attending, or even reading about, a high Mass on this great feast. But there are plenty on such feasts as the "immaculate" Conception of St Mary, or the Precious Blood... 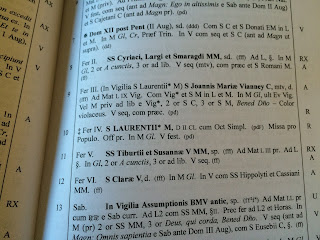 The eponymous St Lawrence whose feast has both a vigil and an octave. I think this was the reason for the dedication of The Saint Lawrence Press. 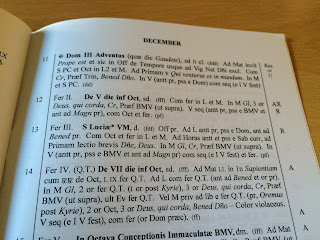 St Lucy, one of my favourites. Notice the Quarter Tense begins on the seventh day within the Octave.
Posted by Patrick Sheridan at 1:06 pm
Email ThisBlogThis!Share to TwitterShare to FacebookShare to Pinterest