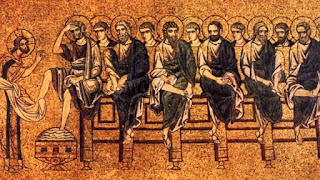 I wasn't going to comment upon this because living, as I do, in Puritania, the most northerly region of coldest Cranmeria, I do not think about liturgy anymore. Strange for a liturgical fetishist, eh? But that's not entirely true. If I think about liturgy at all these days, it's usually in the form of going into an old Anglican church in the country and going over an old, suppressed Latin sequence in my mind or perhaps trying to remember a few lines from the Prophets about healing Babylon, but she is not healed; or the whole of Isaiah chapter three. So I greeted the news of pope Francis's decree secularising the ceremony of the Mandatum with my accustomed apathy. I am actually amazed to find myself agreeing with Dr Joseph Shaw, Chairman of the Latin Mass Society, that this is just a step, and not an altogether significant one, upon the path taken long ago by Rome away from Tradition. Of course, I would go further than Dr Shaw and say that this was inevitable the day Maxima Redemptionis came into force almost sixty years ago; a process analogous to the regress of Marriage in secular society from, at least in this formerly United Kingdom, being defined by The Book of Common Prayer in an explicitly Christian way, through no-fault divorce and subsidised fatherless families, down into the dregs of "redefinition" altogether. If the cherished ritual of the washing of the feet had not undergone such a revolution sixty years ago then this decree would have a significance beyond Francis' accustomed arbitrariness. It doesn't.

The traditional liturgical books used to prescribe "pauperes," who were, in the 20th century at any rate, presumably the less better-off male members of a parish or, aforetime, the peasants living in the vicinity of a cathedral church. "Viri," which means something quite different, only came in with the new ritual, as did the reduction to twelve, rather than thirteen, men. The pasting of the ceremony of the washing of the feet into the Mass of the LORD's Supper is also an innovation, having no warrant in Scripture, and a tendency of 20th century reformers to incorporate as much as possible into a eucharistic context (c.f the rite of Confirmation). Not to mention the bogus interpretation postulated by some traddies that the washing of the feet has some episcopal, or priestly prerogative. Upon such an anti-Evangelical basis, what could you expect from modern Rome but a complete capitulation to the pernicious, worldly doctrines of inclusion and diversity? There are no distinctions worthy of ontological significance anymore so objection to this innovation is just going to be derided as phony outrage. Men, women, old, young, sick, hale, Jew, Christian; we're all the same, really; we're all equal, aren't we?

Of course, what needs to happen now is the re-abrogation of the 1962 missal. Will Francis do this within Ratzinger's stale lifetime? He might not, but then he might. I doubt Ratzinger really cares about traditionalists and their bastard rite. I mean, he never once took part in an "extraordinary form" celebration as pope, and it's highly unlikely that he does now in his dotage.

I can't help but think of the emperor Nero, who legend has it fiddled as the City burnt to the ground. With Francis' constant undermining of what's left of the tradition so cheaply discarded by his predecessors...and for what? To maintain a veneer of credibility in the modern world? To sate his textbook liberal agenda? Anyway...I can honestly see him smiling that saccharine smile as some bloodthirsty fanatic cuts off his head in St Peter's Square before hordes of esteemed Muslim brethren crying Allahu Akbar. I won't mourn.

Once again I can only repeat my urgent invitation to President Putin, the new Constantine, to invade and annex us and to send out the Orthodox clergy to save the remnant of orthodox Western Christians beset on all sides, that the bough cast off might be grafted into the Tree once more. The West has failed.
Posted by Patrick Sheridan at 1:03 pm
Email ThisBlogThis!Share to TwitterShare to FacebookShare to Pinterest