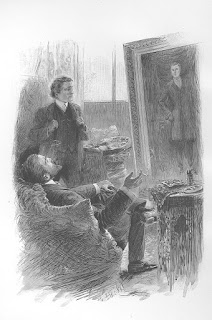 Not a day goes by when I do not struggle to comprehend why to-day so many men are effeminate and so many women are butch, and yet you know that they are not queer (some of the time). Quentin Crisp wrote extensively of this phenomenon, at least among men, in his writings, saying that the kind of Carnaby Street attire that he had adopted in his youth to express his sexual type had now become national costume for all young people, and he observed this not without a sense of resentment. I feel this myself, in a way. For example, my father once told me that there are only two kinds of men who wear ear rings: gypsies and pansies. I've never had any part of my body pierced; I have no desire to look like a farm animal or an harlot. But now we see that all manner of piercings are increasingly popular among young people, not to mention the reprehensible fashion for tattoos. Fashion is dangerous because there is danger in numbers. People, that is persons in significant number, are stupid, tribal, assent to conventional wisdom without question and follow the one person, or small group, with the most forceful personality; the latter embodying power and the former in fear of or craving it. This is the essence of fashion and conformity, as I understand it: a powerful, but small, elite sets the fashion and the great masses just conform. How is that not tyrannous? By contrast, an individualist, like me, lives life according to the law of scarcity value, and everything in this world is subject to that law. There is only one of me, and you cannot reduce me to a set of influences! Of course, as a contrarian my life is made that much more difficult by the inexorable opprobrium of those same masses. When we face each other over the gulf that divides us I am reminded of the words of Gandalf (a type of reverent memory and true faith) to Saruman (a type of this world): "Understand one another? I fear I am beyond your comprehension. But you, Saruman, I understand now too well." Apropos, I said at the beginning that I struggled to comprehend. This is only the difficulty in understanding why someone would choose lies over truth, and tyrannous ugliness over high beauty, not that they make that choice and the contributory factors that inform that choice. But I digress.

Many, if not most, of the idols of fashion, of beauty, of popular culture and musick, &c. are themselves just sheep; tools of an unseen, unknown force for conformity in this world. I am reminded of that young man, about whom I have written before, Christian Collins, or "WeeklyChris." Straight as a die but, by my father's standards, a complete pansy potter, or "poseur," as he would say in his assiduous way. Now, Chris has his good points. While he is not altogether bright (for a Canadian, he knows less about Canadian history than me), he was shrewd enough, and independent enough, to recognise that YouTube could be the stimulant for a very lucrative career at a very young age. As such, he hasn't done a day's real work in his life, but, at the tender age of 19, is already better off financially than you or me. He also seems genuine, and in good faith, by nature. Eponymously he describes himself as a believer, which basically means liberal protestant, but, at the risk of lapsing into judgement, I think that his values, his manner of dress, grooming, his obvious love of himself, the fact that he seems to want to be famous, and even his taste in music (he was recently photographed at a "One Direction" concert) are incompatible with Christianity. He is inextricably worldly, and I don't just mean wise with the wisdom of this world (that is to say, the quality of being shrewd or "street smart"), but completely up-to-date, unquestioning acceptance of secularism; blind acceptance of what he sees because he knows, still less can conceive of, no different. I daresay he would reject my worldview as just plain "weird" and the rigours of Orthodoxy as superfluous. He is also, by the standards of traditional masculinity in my own understanding, rather effeminate. He wears skinny jeans, he has blonde highlights in his styled hair; I saw a photograph (which has since been taken down) of him having his nails buffed; and so on. He clearly takes a lot of trouble over his appearance, a tendency which reminds me of Christ's rebuke of the Pharisees that "make clean the outside of the cup and of the platter, but within they are full of extortion and excess." He is also very charming, and, while I would usually take Wilde's position over his adversaries, I very much agree with the Lord Queensbury when he said: "Men aren't supposed to be charming," or something like that.

Before he started focusing on his career in pop music (mostly covers of the latest in modern noise), Chris was accustomed to make self-help videos for losers, such as "how to have self-confidence," and "how to deal with hate."


In typical pseudo-profundity, Chris enunciates many trite quips about life goals, taking no notice of criticism, and just being yourself. On this last point I would ask him in all seriousness whether he considers himself to be truly himself. Of course, for somebody so well-adjusted and confident that does seem a ridiculous question. And so the answer would probably be in the affirmative, but with the qualification that, as a burden assiduously avoided, he has accepted an identity presented to him by others; that is, by his peers at school, by his rôle models, the masters of fashion and conformity in our culturally-magnificent time. To the extent that he is himself, therefore, depends largely upon what colour hoodie to wear out as opposed to, say, giving up on the Gregorian Kalendar.

Of course, Christian Collins is just one of this wicked and adulterous generation. I suppose what I envy most about him...please don't let on to me that you haven't noted in this catty post an undertone of enviousness...is his capacity for happiness. The smile on his face is undoubtedly the fruit of true happiness, which itself probably proceeds from his innocence. With the overmastering burden of knowledge, of sin, and contempt of the world comes a sense of exile (surely a good sign?), of weariness as with a great burden, and oft resentment. This may seem psychopathic but sometimes I look at humanity with heartfelt loathing; looking, as it were, from men to pigs and from pigs to men and failing to tell them apart. Apart from the multiculturalism thrown in my face whenever I go out, it's one of the reasons I avoid leaving the house. 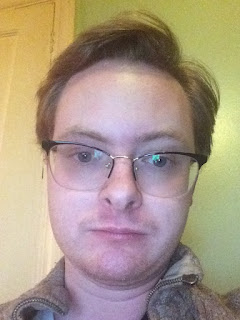 This is me this very evening, just for comparison you understand. I'm sure many of you are reminded of Oliver Cromwell's most famous portrait, "warts and all." Wrapped in a tatty old cardigan, and sometimes even half-cut, I write my posts and live my life.

I understand that this post began well and drifted off. The question, which I completely failed to answer, will be addressed in the next post.
Posted by Patrick Sheridan at 7:18 pm
Email ThisBlogThis!Share to TwitterShare to FacebookShare to Pinterest