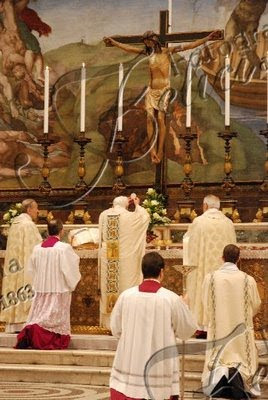 There is an interesting discussion going on over at Fr Hunwicke's blog about auctoritas and orientation in liturgical prayer (do also read the latest about the Latin language - naturally all priests should be Classicists, there is no higher learning than earnest study of the literature of the ancients). Naturally I agree with everything the learned blog host says.
I have a few observations of my own though. If priest and people face together in a common liturgical direction, but this direction is not geographically eastwards, then is there really any point in them doing so? A lot of Catholic churches (probably most) built since the Reformation have lost the correct orientation, and so the apse of the church is at a geographically odd angle. Westminster Cathedral and the London Oratory are noteworthy churches. Once the liturgical direction has been done away with the very notion of a priest celebrating Mass with his back to the congregation suddenly becomes a really objectionable practice, not because of a faulty understanding of the ancient liturgical praxis of the Church (the very downfall of Modernists) but because the contemporary praxis has become divorced from the ancient one. It is for this reason that I take such issue with the so-called Benedictine Altar arrangement (and there are other reasons). Theological/liturgical constructs mean nothing to most Catholics, and as I have said before a row of candlesticks and a crucifix does not avail to correct a liturgical abuse.
What then? It is my sincere belief that facing the wrong way is the absolute worst thing you can do liturgically, but for practical reasons, want of space, money etc, what are we to do? Do we compromise the Liturgy for such reasons, or just make do with what we have? I can offer no imaginative or practical solutions, so comments are welcome.
Posted by Patrick Sheridan at 1:56 pm
Email ThisBlogThis!Share to TwitterShare to FacebookShare to Pinterest