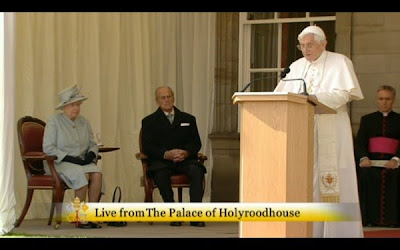 Well that's over; the Bishop of Rome has gone back to the one place where he can truly claim real and immediate jurisdiction. I must say that it was exciting to have the Holy Father visit these shores, brief though it was. It was hard not to get caught up with the euphoria, and the Apostolic journey of the Pope is a matter that touches everyone, whether they like it or not. Everything the Pope said in his speeches was wise and true, and he expounded many truisms which needed to be said. What touched my irreligious parents was the Pope's warning in Westminster Hall against the alarming growth of militant secularism and the marginalisation of Christianity, which alone can claim to be the moral and political foundation of this country. My mother gave a very cogent example of the cult of celebrities, such as people fresh out of the Big Brother House (the likes of Jade Goody, an ugly, talentless and utterly common individual) or the X Factor, or people like Katy Price. Years ago if you had led a life such as hers you tried your best to conceal it - in these latter days scandal and fornication seem praiseworthy things, things hardly to be ashamed of. A scenario has been created whereby people, simple ordinary people, by emulating celebrities who lead promiscuous lives, are not only not restrained from sin, but are actively encouraged to sin by social custom. Not that the Pope's speeches will change anything, whatever David Cameron may have said at the airport about making the British people second guess their utter rejection of religion. I expect that the order of the political day will go on as it did last Wednesday - drive the Church into new catacombs... 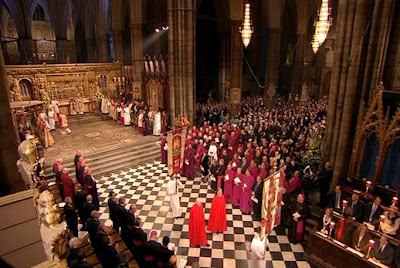 I didn't see everything, but I watched more TV on Thursday and Friday than I had in a long time. I don't have Sky at home so I relied on the BBC News channel. On Thursday I watched the open air Mass at Bellahouston Park in Glasgow, and was trying to restrain a fast-rising wrath most of the time. I hardly think that Eucharistic Prayer II said aloud in the Latin language makes the affair anymore traditional than having a Postcommunion dance. The other abuses, and they were many (the most obvious being Mass versus turbam, although whether or not the Pope was facing the geographical East I don't know), vastly overshadowed what trace of tradition was there. Am I alone in thinking that Liturgy was not ''designed'' (as it were) for great concourse of people in their thousands? Still, it can hardly have been any more messy than when Our Lord fed the Five Thousand with five barley loaves and two fish. What I find distasteful about it, and I am not alone in this, is that the whole affair smacks of the triumph of Ultramontanism and the cult of the Pope over a more traditional and decorous celebration of the Sacred Liturgy, which alone requires the utmost reverence and humility. Does anyone remember what time the Mess, I mean Mass, started? I'm glad the Pope bowed to the local kalendar though.
I was at work the following morning (the Friday) so I missed the Twickenham business (or perhaps I didn't in a sense), but I watched the BBC News channel from around 4:00pm onwards. I was impressed by the speech of the Speaker of the House of Commons, very courteous I thought it. I must get hold of a copy of all those speeches and go over them when I get time. What followed at Westminster Abbey was probably the only thing worth attending, for aesthetic and liturgical reasons. The Evening Prayer service (of a sort - I was actually expecting BCP Evensong but was clearly mistaken!) at the Abbey was far grander than anything the Roman Church provided! The presence of a tunicled Crucifer, Acolytes in apparelled albs and amices, the Dean and Chapter in very fine copes (at least the Anglican bishops were dressed properly too - again highlighting the gross ineptitude of our own bishops) etc all went to my heart, but alas, very little real Liturgy - it was just made up, a meaningless service of a few hymns and intercessions so that dignitaries and church leaders could be two-faced with each other. As if Dr-what's-her-face of the Methodist (who looked more than half like a witch) communion is interested in what the Pope has to say! Still, it was far closer to Tradition than the Bellahouston Mass - at least it was in a church (a very fine church) for one thing. 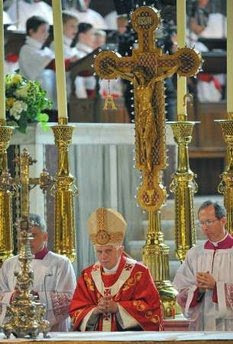 Saturday morning I missed the Mass at Westminster Cathedral because I was too busy travelling to Hyde Park. A friend of mine watched it, and commented upon how ridiculous the Pope having come straight from the Sacristy was, and having a seven foot Crucifix behind the Altar and one small one in front looked. I'd like to have said something about this Mass but I saw nothing of it. But what a travesty Hyde Park was! I left my parish group because my uncle rang me and asked to meet up (I didn't miss them to be honest - hardly anyone spoke to me, and one boy said I was being ''well grumpy''). My uncle introduced me to two very charming young men from Argentina, one of whom knew Latin. It was wonderful to exchange a few words in the midst of that cultural and aesthetic vacuum. Apart from the Argentinians the whole thing was awful. The ''liturgical entertainments'' proved to be about as entertaining and edifying as watching paint dry, although there were Irish dancers, and men! Men look better than girls at Irish dancing in my opinion (although I am biased in this respect, having done it myself as a boy). I was cramped and bored until the Pope came (five and a half hours after I had arrived), which improved things only marginally. It was nice to see the old man in the flesh once again, although the Vigil of prayer itself was farcical - again another made-up service of tacky hymns (Shine Jesus Shine and other jewels of our Tradition) to show solidarity as Catholics by a great display of collective stupidity in the eyes of the world. Is this what Catholicism has become? No wonder it is so hateful, it's completely vile and tasteless.
After the Vigil I felt rather sour about Catholicism, but my ailment and weariness were much cured by a nice dinner with my uncle and the Argentinians. Not much else to say really, except that on Sunday I caught the tail end of the Mass at Cofton Park - just in time for Be still for the presence of the Lord...need I say more?
Much as I was unimpressed and unedified by the Liturgy - so much want of Tradition - I am glad overall that the Pope came. What happens after? Well that remains to be seen. I'm cutting this post short because I have to get ready for work...
Posted by Patrick Sheridan at 1:18 pm
Email ThisBlogThis!Share to TwitterShare to FacebookShare to Pinterest