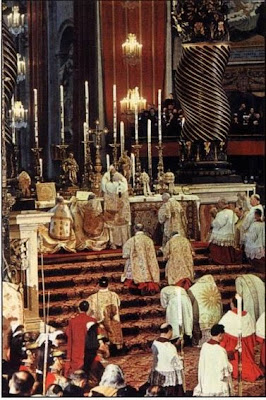 It pains me that some people think I am less than Catholic because I didn't go along with the crowd, wave a Vatican flag, or shout out Viva il Papa during the four days of the Pope's visit. At Hyde Park on Saturday the arrival of the Holy Father was heralded by Handel's Messiah. I wondered at the time whether the words ''king of kings and lord of lords'' meant the Pope...all the time I looked about me, seeing starry-eyed devotees with their banners and flags I thought ''I don't believe the same as you,'' and I daresay that most of the thousands in the Park undermine Catholic teaching in some way. What were they there for? To gape at the superstar Pope? To show solidarity as Catholics by looking ridiculous in the eyes of the world and of posterity? There must be a grain of truth in the Protestant idea that Catholics worship the Pope - how else can you account for what happened? The Papal liturgies over the weekend were tacky and full of abuses - but this doesn't seem to matter to most enthusiasts, because Pope Benedict XVI is the Pope is infallible is the omniscient dispenser of Grace (I wonder who composed his speeches?), who can render abuse orthodoxy and travesty Tradition - merely to see him is to see Almighty God. I must say I felt sorry for the Pope for much of the visit, feeling for his shame. Celebrating Mass at a liturgically inappropriate time in an open field in Glasgow with crap music (arguably the worst part of that farcical liturgy was the Kyrie! Mass VIII is bad enough but they made it sound more ridiculous) can hardly have been to his taste. If St Leo the Great, worthiest of popes, had come to these shores would he have been received thus? 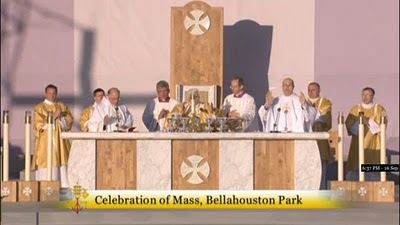 I think that Papal High Mass in the Old Rite celebrated in the Birmingham Oratory with the assistance of the Oratorian Fathers would have been far more impressive and appropriate for the beatification of Cardinal Newman than yet another open air Mass in a field with yet more tacky hymns. This would have attracted fewer crowds too...but then most of the devotees can hardly care for Liturgy, and the appalling Liturgy over the last four days only indicates that the cult of the Ultramontane Pope matters more in the Catholic Church nowadays than the celebration of the Sacred Liturgy. Liturgy is infinitely more important than the Papacy, and Popes bow to the Sacred Liturgy not the other way around (or at least they ought to, Pius XII and the other monstrous popes obviously thought otherwise). Something has become dislocated in the Catholic Church, otherwise the last four days would have been very different. I wonder if I am a minority of one.
Oh and erm...if the Pope doesn't (officially) recognise Rowan Williams' Orders why did he give him a Pectoral Cross? Out of the two photos which is more impressive?
Posted by Patrick Sheridan at 1:16 pm
Email ThisBlogThis!Share to TwitterShare to FacebookShare to Pinterest