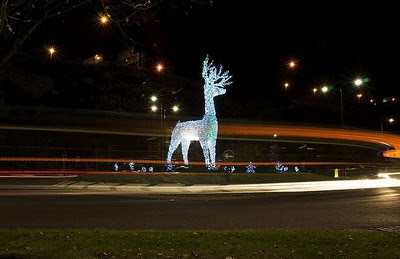 I'm not dead...yet.
Forgive the lack of posts recently but a tonne of other cares and commitments have distracted me from blogging. To be quite honest one cannot simply summon the Muse, and I have had no inclination (largely due to my job) to write my post about Folded Chasubles, or the ancient liturgical witness to the doctrine of St Mary's Immaculate Conception. There is an element of ''journalism'' to blogging, the impetus to simply churn something out, whatever its merit, which in my view renders blogging rather vulgar...and I guess this has been an element in my recent absence too, as it was in my personal downfall at University - nothing was ever good enough.
I had meant to post this comment to my Facebook but it was rather long and there is a limit to the number of words (or spaces or whatever) that you can post as a Status update, so here goes:
Christmas shopping is such a bore. It renders the Feast sterile since we are, in effect, ''forced'' out of a sense of obligation to be charitable (in a very forced and false way), even if we are not so disposed towards that person, year in year out; routine, running out of ideas about what to buy people etc (and I am by no means the best at knowing what other people want!). That plus the fact that Christmas and Easter seem to be the only things Supermarkets promote (and don't those hackneyed and completely tasteless ''festive'' songs get on your nerves! If I hear Cliff Richard one more time I shall boil over! Though arguably the worst is ''Mary's boy child Jesus Christ'', which if I remember rightly I had to put up with in my own parish at last year's Carol Service before Midnight Mass (why not replace it with Mattins and have the Carol Service at an earlier date?) - the melody is simply hideous and the whole thing theologically inappropriate - ''because of Christmas Day''? Yeah right...), though, of course, no word at all about the Saviour, just discounts on food and drink to maximise profits so that we all greet that most dear of Feasts with binge eating and drinking and a distinct lack of propriety; to feel good about something utterly shameful...I actually despise what Christmas and Easter have become. Commercialism and greed have rendered the two Great Feasts around which the two Cycles of the Liturgical Year are built forever accursed. Alas for Our Lord.
I have worked in retail for the last five years, and the general thrust of half the fiscal year in this industry seems to be towards the promotion of Christmas from August to December; and Easter from January to March or April (depending upon which Sunday Easter falls in the Gregorian Kalendar), with the rest of the year (until August of course) devoted to things like ''back to school'', the Summer and other seasonal things. This, to me, appears to be a reflection (and extension) of mankind's tendency towards greed and incontinence, and a complete lack of patience and rhythm to life, which is essential in the formation of virtue. This is why we have a Liturgical Year, not only to reflect upon the principle Mysteries of the Incarnation and Redemption, but so that we are kept in patience and rhythm, having fasting and penitence in due season, and feasting and joy in others, but interpenetrating, both being mindful of the other, and not exclusive. I doubt any 20th century would-be reformers of the Liturgy (like most Protestants) understood this - like folded chasubles, abolishing Octaves and Vigils - what do you get from this but the flattenning out of the year?
I was telling my Store Manager (whom I respect) this on Wednesday morning, and he said that he thought I was very intelligent, and that I thought about things ''in a way that is beyond most people who work here'' (his words not mine - though I enjoyed hearing them). Of course it wouldn't do for a multi-million pound company to promote fasting would it? Sometimes I wish I could go back in time to the 12th century (careful to bring my Tolkien books with me), locate a nice Monastery and just experience authentic Liturgy for the rest of my life, speaking nothing but Latin...
Posted by Patrick Sheridan at 1:48 pm
Email ThisBlogThis!Share to TwitterShare to FacebookShare to Pinterest