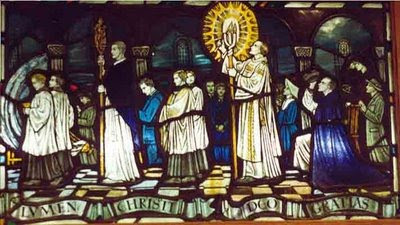 The general thrust of this blog is, as you can read in the very first post I wrote back in May of this year, to raise awareness about how the Roman Rite (and by extension the whole Sacred Liturgy) has suffered, suffered grievously, at the hands of the very people raised up by God to safeguard it, to be merely links in an everlasting chain (not lords thereof), passing unhindered, certainly not mutilated, the Sacred Liturgy from one generation to the next until Christ comes again in glory to judge the living and the dead. All I aim to do here is to ask honest questions about things which honestly confuse me. Why, for instance, are we to accept, beneath a veil of pseudo-obedience, that Holy Week needed to be ''improved'' by Pius XII and his small oligarchy of self-important liturgists, and that such little oligarchies as these are noble ecclesiastics appointed by God, and therefore having some sort of special insight into the mysteries of Liturgy, and blessing of authority to do as they please? Are we to believe, by extension, that Tradition is inherent in the magisterial rulings, divorced from received custom and orthopraxis and ritual, of the Sacred Congregation of Rites in a way which is superior to the said received ancient custom? If we are to take the ''links in the chain'' analogy, we may well compare the revised Holy Week rites to a serious break in the chain, and the Pope starting a new chain, divorced from Tradition, all by himself; thereby exalting not the greatest mystery of the Faith, the greatest events in the history of the World, but the Pope's sole authority to modify history, and the faith. Is he attempting to destroy the fundamental Christian Mysteries only to remould them according to a fashion of his own imagining, consonant only with his vainglorious hermeneutic of office as pastor of all Christians? I'm sorry but this is not an exaggeration, and I utterly repudiate attempts to lessen the blame on Pius XII (so prevalent in Tradworld), which anger me. Holy Week, need I say, is the most fundamental part of the whole Liturgical Year, where we remember (in an all-encompassing sense) the Passion, Death and Resurrection of our Incarnate Lord - a matter infinitely beyond our understanding; at such a solemn and serious time as this we ought to be faithful to Tradition, not a ''tradition'' mediated by a team of liturgists who sought to improve, or embellish, that which came before. 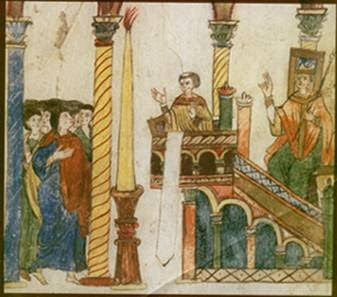 This blog is diametrically opposed to the much-reformed liturgical books of 1962, and not without reason. So-called Traditionalist groups who make use of these books may like to imagine that they contain at least the semblance or ghost of Tradition, and they cite such reasons as ''but the Mass is still vastly in tact, with the Preparatory Prayers, Last Gospel, Offertory prayers, traditional cycle of Scriptural pericopes, the Roman Canon'' etc as reasons for their unreasonable use of these books, but I fear that they misunderstand me when I say the ''liturgical books of 1962.'' Why would you think that I had just the Eucharistic liturgy in mind, and not the entire Liturgy? Mass conforms (ordinarily) to the Office of the Day. Rubricarius of the St Lawrence Press blog writes better on this than I could, but it may suffice to say here that a 1962 Breviary can be divided evenly between two tomes, Tomus Prior and Tomus Alter; before then there were four Volumes, for the four seasons of the year - so much has been cut out.
Opponents of my view of the Liturgy, and they are many, make recourse to a very hackneyed argument. They say ''well if 1962 is not good enough, what is?'' They accuse me of archaism, supplanting the will of the Pope of Rome with the will of the Pope of Liturgiae Causa, that my understanding of Tradition is Protestant, anachronistic etc. Which year is the year of liturgical sublimity they ask? They claim, especially since 2007, that since the Holy Father has designated 1962 as a sort of cut-off year, it is reasonable, in deference to the Pope's authority, to view the liturgical books of 1962 as a go-to year, or at least a go-between year; a brick by brick endeavour, with the more sensible ones using 1962 as a means to an end rather than an end. I must say I find the ''reform of the reform'', two forms existing side-by-side crowd more irksome than than Traddies; they are essentially people completely ignorant of Liturgy, who would have Catholic pseudo-liturgy as a purely Sunday affair, with the social kingship of Christ and various pro-this or anti-that causes of more importance than Tradition, with liturgy in an average parish subsisting in a liturgically relativistic fudge. In other words they are just as traditional as your average Protestant. But coming back to the Traditionalists who at least know '62 for what it is; what do you get from '62 which you don't get from the New Rite, provided that it is done properly? I don't quite understand why you would render support for a cause which is only going to do more harm than good. If you want Tradition, then look to Tradition - but not a tradition which is just as made up as that which you are flying from. The situation reminds me in a certain sense of the debate at Estolad between the fathers of the Fathers of Men in Beleriand (see The Silmarillion, chapter XVII); one of whom said that verily they had fled from the Shadow into the westward shorelands only to find it here before them.
I don't claim to know any answers to the questions I ask here (why else would I ask them?), or to have some great store of my own wisdom built up after years of long and secret study. Especially I do not know how to counter arguments about archaism, and an ''ideal'' year for the Roman Liturgy - such a year does not exist. Personally I hold a very dim view of Rome and her latter dealings with Liturgy, and tend to the view that if you want authentic Liturgy Rome is the last place to look if you want it! No my view is that I would be content to just quietly get on with Liturgy unmolested by the Pope. I have liturgical ''opinions'' (if they can be so called), for example I would use the Julian Kalendar and discreetly disregard such feasts as the Sacred Heart when they come around every year, but I cannot impose them on anybody in my parish. Or perhaps the Roman Liturgy has truly had it; it has served its purpose, but is now so far gone, so changed, having been pushed and pulled about over the centuries by would-be reformers and Popes that any attempt to revive a more holistic Roman Liturgy would indeed merit the charge of Protestantism and archaism; that having at least intelligible motives it would avail nothing but to make a mockery of Liturgy itself. 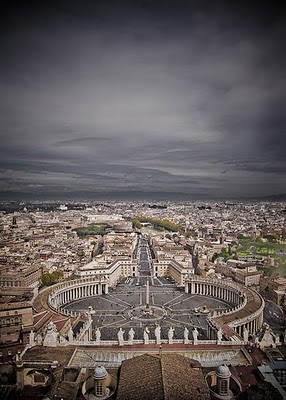 God alone sees all ends. I only fear that real Tradition in the Roman Church will be driven into catacombs, to be the affair of eccentrics rather than the duty and direction of all devotion and love of all Catholics alike.
Posted by Patrick Sheridan at 4:32 pm
Email ThisBlogThis!Share to TwitterShare to FacebookShare to Pinterest