Draft on the creature Gollum... 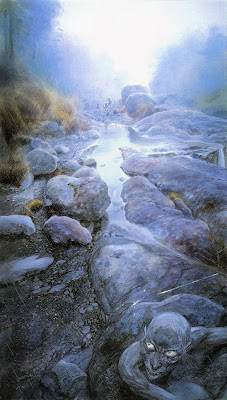 Going through my posts on the Dashboard I remembered that I had several draft ones, abandoned for various reasons. I have deleted them all, for they were all wanting and I'm glad I never published them, but this one was interesting and I can't presently remember why I neglected to finish it. Most likely I ran out of things to say and couldn't think of how to string the words together into a coherent post. I haven't touched it so forgive any want of continuity!
I overheard a conversation this afternoon [this is about two months ago] in the parish social club about the creature Gollum. In an odd sort of way Gollum is one of my favourite characters in The Lord of the Rings, if only because he is pitiable and wretched - but more significantly in terms of the ''theology'' (if I may make so bold) of Tolkien because he is intrinsically linked to Frodo's personal salvation, an unlikely instrument of Grace. He is a kind of anti-hero, a counter-influence to Samwise Gamgee. I think that were either of the two absent from the narrative the ending would have been quite different; Sauron would almost certainly have regained the Ring. When I first read The Lord of the Rings (in the very distant past - I would love to regain the ''first impression'' again. In my boyhood I loved this book above all literature. The love remains, and always will, but it is ''lessened'' somewhat now by familiarity) I was confused by Frodo's decision to take Gollum in the Emyn Muil, and hoped that something would happen to Gollum along the way, but only when I finished the book did I comprehend somewhat of the necessity of Gollum - for Frodo (and also for Sam).
Those of who have read The Lord of the Rings will remember The Shadow of the Past (Chapter II), in which Gandalf told Frodo his account of Gollum's life, as near the mark as he could guess. Gollum (or Sméagol as he was then) was akin to the distant fathers of the Stoors who still dwelt by the banks of the Anduin near the Gladden Fields, and by a great ''accident'' in the tides of the Ring's fortune he discovered the Ring (no pedantry in the combox please - this is not an exhaustive account of every detail), murdered his friend, was driven from his home into the mountains and gnawed bones in bitterness, cursing both the light and the dark. The Ring galled him and he ''lived'' (although he did not obtain more life) for many times the natural span of his years. When Bilbo came and took the Ring Gollum left the mountains, went in search of Bilbo but was drawn southwards to Mordor, where he was captured, tortured, and commanded to search for the Ring (although Gollum had purposes of his own in spite of Sauron). Eventually the Ranger Aragorn captured him by the Dead Marshes and took him to the Wood Elves of Mirkwood but his escape was contrived by the Orcs and he went off again in search of the Shire. He got lost and being then starved gave up at the West Gate of Moria, where he picked up the trail of the Fellowship and so came upon Frodo and Sam in the Emyn Muil. When he heard Gandalf's tale of Gollum's life in the quiet of the Shire Frodo felt no pity for Gollum, desiring only the creature's death, but upon their eventual meeting in the desolate hills he heard from far off the voice of Gandalf and did pity Gollum (''and that it is my fate to receive help from you, where I least looked for it, and your fate to help me whom you long pursued with evil purpose'' were Frodo's words before the Black Gate). Thus is the tale of the Ring made more meaningful.

Any rational person reading The Lord of the Rings for the first time would know that Gollum would almost certainly have betrayed Frodo, sooner or later. Later because Gollum desired (in so far as he had one single ''purpose'' with Frodo) to keep the Ring safe in spite of Sauron for as long as humanly possible. Sauron was his greatest enemy. I say certainly but perhaps not, but for the clumsiness in fidelity of Sam unto Frodo, which served only to push Gollum over the edge. As I write this I recall that moment in Chapter X of Book IV where Gollum came down from the heights ot Cirith Ungol and beheld Frodo and Sam lying together:
''Gollum looked at them. A strange expression passed over his lean and hungry face. The gleam faded from his eyes, and they went dim and grey, old and tired. A spasm of pain seemed to twist him, and he turned away, peering back up towards the pass, shaking his head, as if engaged in some interior debate. Then he came back, and slowly putting out a trembling hand, very cautiously he touched Frodo's knee - but almost the touch was a caress. For a fleeting moment, could one of the sleepers have seen him, they would have thought that they beheld an old weary hobbit, shrunken by the years that had carried him far beyond his time, beyond friends and kin, and the fields and streams of youth, an old starved pitiable thing.
''But at that touch Frodo stirred and cried out softly in his sleep, and immediately Sam was wide awake. The first thing he saw was Gollum - 'pawing at master,' as he thought...Gollum withdrew himself, and a green glint flickered under his heavy lids. Almost spider-like he looked now, crouched back on his bent limbs, with his protruding eyes. The fleeting moment had passed, beyond recall.''
Tolkien said himself that tears stained the paper upon which he wrote this [double check this isn't the Field of Cormallen - Letters, Pater ad Filium natu...1944-45 sometime] One wonders what the passage of Gorgoroth would have been like but for this harsh rebuke by Sam. It was Gollum's cunning that won Frodo the passage of the Emyn Muil and the Marshes, and eluded the guile of Morgul; but it was the succour of Samwise that got him to Mount Doom. It was...[what? Edit] Sam and Gollum are necessary in the Tale of the Ring - Frodo would have perished but for both of them together
of course Bilbo didn't become another ''gollum'' precisely because his unlikely entry into the Tale of the Ring was very different from Gollum - the way of the Ring to his heart was pity, pity and mercy not to strike without need. Well did Gandalf say that the pity of Bilbo may rule the fates of many, and he was well rewarded
Mount Doom, Frodo's forgiveness of Saruman - influence of Gollum, or the Ring? Or both? Seen most clearly in Saruman's reaction, mingled wonder and respect, and hatred.

The Lord of the Rings moves me in so many ways. Tolkien can be as familiar and almost rustic as an apple, and you laugh at his jokes, but it is a work which also rends the very will, and tugs at the heart. When I first read this masterpiece of religious literature it was like the very hand of God had entered into my soul and stirred there, even to the very bottom [change that], and I was moved by unaccustomed [something] - and significantly this is a feeling I get only from the Sacred Liturgy...
Is this worth finishing?
Posted by Patrick Sheridan at 1:21 pm
Email ThisBlogThis!Share to TwitterShare to FacebookShare to Pinterest