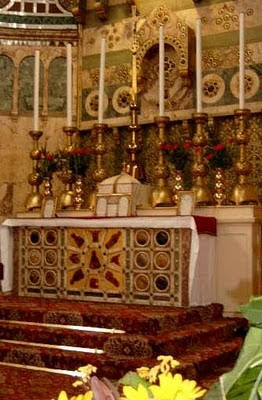 The use of six candlesticks on an Altar with gradines is a Counter-Reformation novelty directed by the Caerimoniale, unheard of in the Patristic or Medieval Church, and owes its origin to the Tridentine reform of the Liturgy, and also the bad taste of the 17th century - compare the Roman ''cotta'' and the use of lace ornamentation. Before the invention of the ''big six'', any additional candles for the greater Double feasts were placed around the Sanctuary in divers parts unconnected with the Altar (such as the Rood Loft). This still seems the best way if you ask me.
So...kudos to whomever can guess who wrote this, and why I find their work magnificent!
''Such childish things as branch candlesticks and other small candlesticks need only be mentioned to be condemned. They are used abroad for the very different purpose of Benediction, and have no meaning on our altars. They offend both against good taste and ecclesiastical propriety; luckily they are not lawful in our Church, for the Ornaments Rubric knows them not.''
Posted by Patrick Sheridan at 12:20 pm
Email ThisBlogThis!Share to TwitterShare to FacebookShare to Pinterest