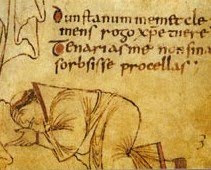 The culture of Roman Catholicism in the Counter Reformation period seems very different to me than the culture and tradition of Catholicism in the Early Church and the Middle Ages. This is not some quibble or personal vendetta I have against the lace cotta, but something which genuinely startles me. The liturgical life of the Roman Church became sterile or frozen after Trent, and there was little to no room left for a natural flowering of liturgical piety, and an authentic, traditional local praxis built upon the natural development of the received diocesan, even parochial, custom. Pius V, who reformed the Missal and Breviary, seems to have mistook the meaning of ecclesiastical universality for uniformity, and the imposition of the Tridentine Missal upon the whole of Europe pretty much heralded the end of local custom in the Roman Rite. I expect that it would surprise no reader of this blog if I said that I have significantly less reverence for the English Martyrs (such as St Robert Southwell, who was among the first to use the reformed Missal in this country) than I have for such English saints who herald from a time long before Trent as St Bede, St Hilda and St Dunstan. They possessed a wisdom and piety which is significantly lacking in modern saints, who were bored (sorry, nourished) by Low Mass, busy telling their beads and being devout before the Blessed Sacrament exposed in a monstrance.
I have no idea why but Fr Hunwicke's brilliant post on St Mary's perpetual virginity today put me in mind of Eadmer's Life of Dunstan, which I read for the first time when I was at college. It's exquisite:
When he was in residence at Canterbury, Dunstan used to visit the holy places in the dead of night to sing psalms and to keep vigil. On one occasion he moved to the eastern end of the church to pray to the Mother of God.
Suddenly, and in a quite unexpected way, he heard unusually sweet voices singing in the darkness, echoeing through the church with subtle melodies. Peeping through a hole in the perforated screen, he saw that the church was completely filled with shining light, and a crown of virgins were moving round in procession, singing as a choir the hymn by the poet Sedulius: ''Cantemus socii Domini.'' 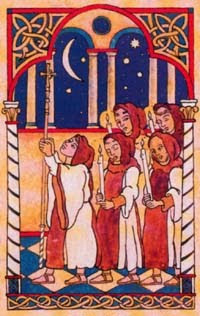 Each half of the choir answered the other, verse by verse, as if in a round, singing: ''Let us sing, O friends, let us sing to the honour of the Lord! Let the sweet love of Christ sound through pious lips!''
I don't mean to sound disparaging, but there is no mention here of ecstasy induced by the radiance of the Eucharistic Lord emanating from the Ostensorium, or of miraculous medals or of sacred hearts; just psalmody, traditional hymnody, liturgical procession and keeping the night vigils - and all in common. If such devotion as this is inspired purely by liturgical witness to Christ, then what shall we say of devotion inspired by more famous, but far less worthy, traditions as Benediction of the Blessed Sacrament? If St Dunstan were alive today I think he would find Catholicism wholly alien and tacky.
Posted by Patrick Sheridan at 12:12 pm
Email ThisBlogThis!Share to TwitterShare to FacebookShare to Pinterest