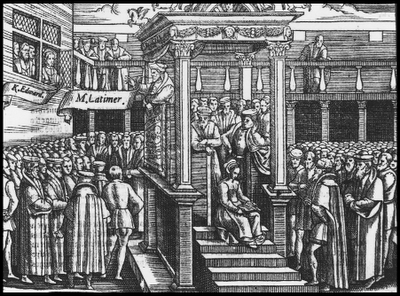 Bloggers have each their own particular skill; some don't seem to be skilled in the art of writing at all, but are perhaps better at other things; others repeat catchy phrases and quips over and over again (''say the black, do the red,'' or more annoyingly; ''the new, corrected translation'') to drum into their readers a sort of party-line, any deviation from which and one is in danger of heresy, or one's loyalty to the Magisterium is brought into question. Perhaps bloggers of this sort are skilled at manipulating their influence as instruments of the Magisterium, and that the repetition of those quips covers up their ignorance of Liturgy? Lord only knows. Patricius (and I don't often refer to myself in the third person) doesn't have catchy phrases, nor does he seek to enslave his readers even so; he seeks here merely to draw people out of the Ultramontane heresy by the insurmountable weight of reasoned (well, sometimes) argument. If Patricius has convinced anyone of the shortcomings of that anti-Traditional vice, then it seems that, to an extent, what he sought to accomplish has been fulfilled.

I said at the start of this post that bloggers have each their own particular skill - what would mine be? And it was not in idle fancy that I chose upon this woodcut of Hugh Latimer preaching. Can anyone guess why? Readers should know that I am not the least bit interested in Protestantism, or any of its detestable forms. It just irritates me that many seem to confuse Protestantism with rejection of Ultramontanism. Protestantism is a heresy which protests against the articles of Faith as they are found in the decrees of the Ecumenical Councils and the Sacred Liturgy, and distorts the meaning of Holy Writ. Therefore, methinks that those Ultramontane types who blindly follow the writ of the bishop of Rome are more Protestant when the aforesaid bishop overturns the Tradition of the Church by the invocation of trumped up ''apostolic authority.'' This vainglorious ''authority'' is nothing more than the pope's private interpretation of the Faith. In other words, there is no one on the face of this earth more full of shit than the Pope.
Posted by Patrick Sheridan at 12:27 pm
Email ThisBlogThis!Share to TwitterShare to FacebookShare to Pinterest