The Twelve Conclusions of the Lollards... 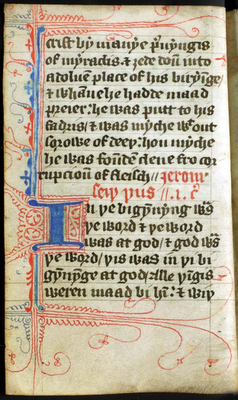 I was hoping to find these conclusions in my copy of Tolkien's A Middle English Reader & Vocabulary, but no such luck - it would have been nice to read them in the Middle English in which they were composed. At any rate it has been a while since I read Tolkien's first academic publication (to be fair it was a joint effort; he compiled the Vocabulary, whereas his tutor Kenneth Sisam supplied the texts). As you know, the Lollards, or mumblers, were proto-Protestant heretics suppressed (largely) by the Church of England, although many outwardly conforming Lollards survived well into the days of the Reformation. The Twelve Conclusions of the Lollards (a kind of compendium of their beliefs, like to the Ninety-Five Theses of Martin Luther) were nailed to St Paul's Cross and submitted to Parliament (which took no action) in 1395. At any rate Wycliffe's Bible (pictured above), like the Coverdale Psalter used by the Catholic Church of this country in her daily offices, is a masterpiece of English literature.

Here is an interesting example of the Lollard ''conclusions.'' They seem to have confused veneration of Christ's Rood with the veneration of anything having had some connexion with Christ's person. The conclusion itself is vile and unreasonable, but I loved reading it.

The eighth conclusion needful to tell the people beguiled is the pilgrimage, prayers, and offerings made to blind roods and deaf images of tree and stone be near kin to idolatry and far from alms deeds. And though this forbidden imagery be a book of errors to the lewd people, yet the image used of Trinity is most abominable. This conclusion God openly sheweth, commanding to do almsdeeds to men that be needy, for they be the image of God in a more likeness than the stock of the stone, for God sayeth not Faciamus lignum ad ymaginem et similitudinem nostram aut lapidem, but faciamus hominem etc. For the high worship that clerks call latria longeth to the godhead alone and the lower worship that is called dulia longeth to man and to angel and to lower creatures. The corollary is that the service of the Rood, done twice every year in our church, is fulfilled of idolatry, for if the Rood tree, nails, and the spear, and the crown of God should be so holy worshipped, then were Judas' lips, whoso might them get, a wonder great relic. But we pray thee, pilgrim, us to tell when thou first offerest to saints' bones enshrined in any place, whether relieves thou the saint that is in bliss or the alms house that is so well endowed. For men be canonized, God knows how, and for to speak more in plain, true Christian men suppose that the points of that noble man that men call Saint Thomas, were no cause of martyrdom.
Posted by Patrick Sheridan at 8:28 pm
Email ThisBlogThis!Share to TwitterShare to FacebookShare to Pinterest