The Door of Night... 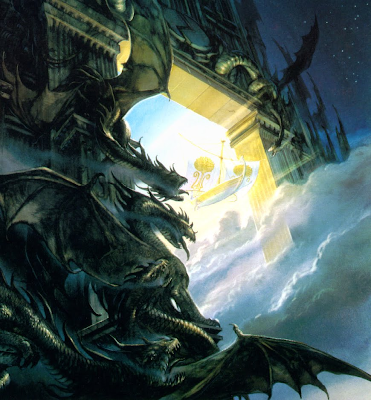 ''Thus came it that the Gods dared a very great deed, the most mighty of all their works; for making a fleet of magic rafts and boats with Ulmo's aid - and otherwise had none of these endured to sail upon the waters of Vai - they drew to the Wall of Things, and there they made the Door of Night (Moritarnon or Tarn Fui as the Eldar name it in their tongues). There it still stands, utterly black and huge against the deep-blue walls. Its pillars are of the mightiest basalt and its lintel likewise, but great dragons of black stone are carved thereon, and shadowy smoke pours slowly from their jaws. Gates it has unbreakable, and none know how they were made or set, for the Eldar were not suffered to be in that dread building, and it is the last secret of the Gods; and not the onset of the world will force that door, which opens to a mystic word alone. That word Urwendi only knows and Manwë who spake it to her; for beyond the Door of Night is the outer dark, and he who passes therethrough may escape the world and death and hear things not yet for the ears of Earth-dwellers, and this may not be.'' (The History of Middle-earth, Volume I, Chapter IX, The Hiding of Valinor).

Earendel keeps ceaseless watch upon those doors, lest the Dark Lord figure out the secret of them and essay to rend them. I have often wondered about the presence of ''dragons'' - creatures of Morgoth, even if they are lifeless. Smoke is said to issue ever from their jaws. Perhaps they function like to cathedral gargoyles, such as you find on Notre Dame de Paris? The idea was that images of devils would cheat the Devil into thinking the church were a place already claimed by them, temples unto his cult, or something. The Middle Ages were fun!
I dreamt of those doors once, when I was staying with my grandmother in Cornwall, as a boy of 14 or 15 Summers; I stood upon the edge of a vast precipice and beheld an unbroken forest kingdom below, beyond which was a sea, which I could descry with the sight that was given to me, and amidmost were the impenetrable doors. I longed to fly like a bird to them, but I woke up and the vision was taken away. It was time to get up.
Posted by Patrick Sheridan at 2:07 pm
Email ThisBlogThis!Share to TwitterShare to FacebookShare to Pinterest