The Eye of Sauron... 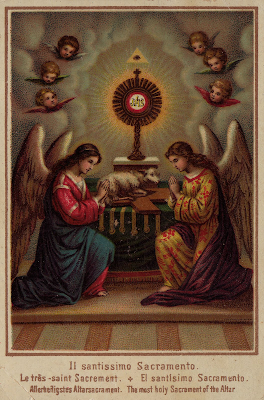 ''Of old there was Sauron the Maia...'' (The Silmarillion, Part V, Of the Rings of Power and the Third Age).

A few years ago I attended a Forty Hours Prayer where, during the Mass coram Sanctissimo (on the third day), the celebrant preached (!) about the Blessed Sacrament. He contrasted the Sacrament in the monstrance to the great Eye of Sauron, a symbol of vigilance and a reminder that God pervades over all, or something. I was told in the vestry afterwards that most eyes in the church fell upon me when the name of Tolkien was uttered - I guess one of a number of reasons that preaching is actually forbidden during Masses coram Sanctissimo. I felt obliged to remonstrate with the celebrant about his choice of topic (naturally my complaints and adherence to the law of the Church regarding the subject of a sermon at all were completely ignored), since it seemed to me that his information was based upon the Peter Jackson film interpretation of Tolkien's magnus opus, and not the work of Tolkien himself. One of the most obvious discrepancies between The Lord of the Rings and the film trilogy is that of the physical form of Sauron. In the film he is depicted as a gigantic floating eyeball wreathed about with fire and lightning. I imagine that this is because the people who made the film mistook Frodo's vision in the Mirror of Galadriel:

''In the black abyss there appeared a single Eye that slowly grew, until it filled nearly all the Mirror. So terrible was it that Frodo stood rooted, unable to cry out or to withdraw his gaze. The Eye was rimmed with fire, but was itself glazed, yellow as a cat's, watchful and intent, and the black slit of its pupil opened on a pit, a window into nothing.'' (The Lord of the Rings, Book II, Chapter VII, The Mirror of Galadriel). 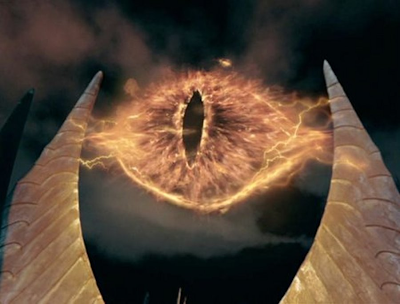 The Lord of the Rings itself contains no physical description of Sauron. I believe this to be a literary device of a sort (like the Eagles, or lembas (waybread, viaticum) - naturally miles are miles, and hunger and thirst are even so in Middle-earth, and lembas makes plausible long journeys in the wild on foot), a means of rendering the Dark Lord more menacing. The question remains, though: what did Sauron look like? It is a cogent question though difficult to answer, for Sauron had spent many ages in Middle-earth and could formerly assume many forms. Therefore it is behoveful that we look to the Ages of the legendarium to piece together a picture of the emissary of evil. 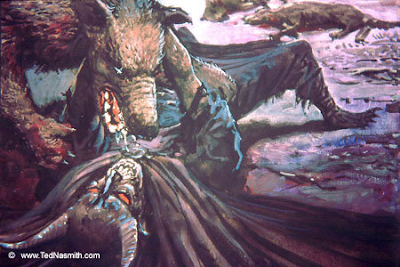 The Battle of Huan and Sauron, here in the form of a ''monster,'' I guess. Ted Nasmith.

As I have said hitherto, Sauron was in origin a Maia, of the people of Aulë the Smith, and is thus akin both to Saruman (who was also of the people of Aulë) and to Gandalf . As a Maia, he had certain inherent abilities, which to Men would appear ''magical,'' though to the Maiar they were just as natural as the ability to walk or to sing. Of these great was his power to change shape at will. In The Silmarillion, Sauron's ''own accustomed form'' seems to have been human - it was customary for the Ainur to imitate the form of the Children of Ilúvatar in their dealings with them, and insofar as the manifestation of the will of the fëa (spirit) corresponded to their Valinorean stature (cf. The History of Middle-earth, Volume X). For example the Diabolus Morgoth first descended upon Arda in girth and majesty greater than any of the Ainur, ''as a mountain that wades in the sea;'' Ulmo, Lord of Waters, could be seen as a mounting wave, etc. In the battle between Sauron and Huan the great Wolfhound of Valinor, Sauron was pinned down, and in his endeavour to escape he shifted shape, from wolf to serpent and thence to ''monster,'' and upon his defeat, fled in the form of a vampire bat, ''great as a dark cloud across the moon,'' dripping blood from his throat upon the trees. At the end of the First Age, dismayed by the downfall of the Diabolus Morgoth, Sauron abased himself and assumed the most beautiful form he could devise, and did obeisance to Eönwë the herald of Manwë. He would not, however, return in humiliation into the West to abide the judgement of the Valar for his service to Morgoth, and he hid himself in Middle-earth. His repentance, therefore (which was probably genuine, if only out of fear of the Valar), caused a greater relapse, until slowly, beginning with fair motives (the re-ordering of Middle-earth after the tumults of the War of Wrath, the rehabilitation of the wild Men ''neglected'' by the Valar, etc), he himself became a ''dark Lord.'' As one of the Maiar, however, indeed the greatest of the Maiar, he kept the power to change shape. 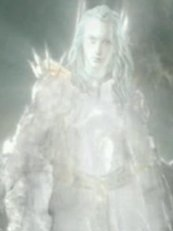 Early in the Second Age, the age of Númenor, Sauron appeared to the Elves of Eregion, exiled Gnomes who refused to return into the West, in his most beautiful form and took the name Annatar, Lord of Gifts, unto himself. His teaching was most enamoured of the Gwaith-i-Mírdain, the Jewel-smiths who followed Celebrimbor, for Sauron was skilled in craft, and under his teaching they wrought the Rings of Power. To all but the most wary his countenance was fair and wise, but some misdoubted his fair seeming - Galadriel rejected him, as did Elrond, and he was not welcome in Lindon. In this form Annatar was taken to Númenor as hostage of Ar-Pharazôn, the last king, and there he corrupted the Men to idolatry and the worship of Morgoth. In the tumults of the Downfall of Númenor Sauron's fair form was dragged down in the ruin of the temple of Morgoth, and destroyed, and his spirit fled back to Mordor on a cold dark wind. In the Dark Tower he fashioned for himself a new form, terrible to behold, and the form in which he wrought so great an evil he could never assume again. He could never again appear beautiful to Men. Interestingly, this mirrors Morgoth's declension from beauty and splendour into ugliness and impotence. Morgoth, who in the earliest days of Arda was brighter than the Sun and could drive all the Valar into retreat, became permanently incarnate and was, therefore, vulnerable and afraid, and waged war by means of subordinates and devices whilst remaining safe in the deepest depths of Angband - remember that he took up the challenge of Fingolfin perforce, enduring the names ''lord of carrion'' and ''wielder of thralls'' in the presence of his captains.

In the Battle of the Last Alliance, at the end of the Second Age, Sauron himself came forth after the Siege of Barad-dûr and wrestled with Gil-galad the Elven-king and Elendil of Númenor, slaying them both, but was himself overthrown, Isildur having cut the Great Ring from his hand. In his defeat he lost his physical form altogether, and we are told that: ''...he forsook his body, and his spirit fled far away and hid in waste places; and he took no visible shape again for many long years.'' 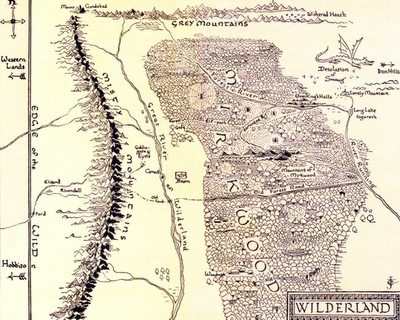 During the first millennium of the Third Age Sauron remained impotent and invisible in the wild, until he returned to Dol-Guldur in the south of Greenwood the Great. We know nothing of his appearance at this time, the ''Shadow of Sauron,'' except that he exerted vast influence and dark things crept back to him, the great forest became the haunt of dark things, and was named anew; Mirkwood it became. It would appear that without the Ring, which was lost, he could not fashion for himself a new form, or would not. Even after his return to Mordor he would not even permit the Orcs to use his name on their devices or in parlance beyond his realm, something which Aragorn noted after the death of Boromir when examining the livery of the soldiery of Saruman (though since the lieutenant of the Dark Tower declared himself the ''Mouth of Sauron'' is is likely that either Aragorn's information was obsolete, if indeed this is not an inconsistency in the story).

Towards the end of the Third Age, when Bilbo found the Ring in Gollum's cave, Sauron was driven out of Mirkwood by the White Council and returned again to Mordor, though his flight was feigned and his return long-prepared by the Nazgûl. He must, by this time, have created for himself a new form. By the end of the Third Age, with the onset and duration of the War of the Ring, Sauron did indeed have a physical, human form. As I have said heretofore, there are no descriptions given anywhere in The Lord of the Rings, and people are often confused by constant references to the ''Eye of Sauron,'' and the ''Eye of Barad-dûr.'' There are cases where this is clearly figurative, but others it would appear that Tolkien equates the Eye with Sauron himself - as seems to be the case with Frodo's vision in the Mirror of Galadriel; ''the Red Eye will be looking towards Isengard,'' and all that.

However, Sauron clearly had a real physical, human form. Gollum, who had seen the Dark Lord in person, said: ''He has only four [fingers] on the Black Hand, but they are enough.'' Furthermore, there are other references which indicate Sauron's ability to travel around freely such as Denethor's remonstrance with Pippin that Sauron would not leave the Dark Tower until he came to triumph over him, or, curiously, Aragorn's command that the lord of the Black Land must come forth to abide the judgement of the King.

The Letters of J.R.R Tolkien, however, procure the answer to the question we asked at the beginning of this post.

''Sauron must be thought of as very terrible. The form that he took was that of a man of more than human stature, but not gigantic.'' (The Letters of J.R.R Tolkien, no.246).

My supposition is that the ''Eye of Sauron'' must be seen as a metaphor for his constant vigilance - it could even refer to the Palantír of Minas Ithil which he had seized in the overthrow of that city. It would certainly explain why Denethor was driven mad, and Frodo saw the glazed yellow eye - for Sauron exerted great command over the Palantíri, and could make those who foolishly dared to look into them see only what he wanted them to see - unless they had a will of adamant and could wrest the stone from him.

So there we are. Someone (actually a number of people) suggested I do a doctorate ''in Tolkien.'' Anybody have any suggestions as to what exactly?
Posted by Patrick Sheridan at 9:00 am
Email ThisBlogThis!Share to TwitterShare to FacebookShare to Pinterest