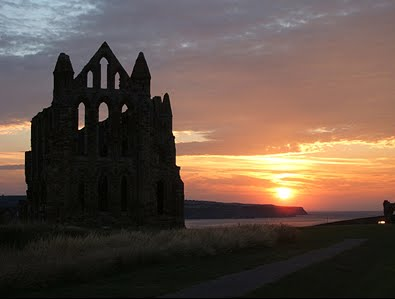 A silhouette of Whitby Abbey - a vision of that which has been left far behind by the flowing streams of Time.

I am not a protestant - protestants do not pray to the Saints, nor do they make such a fuss about Liturgy, or ornaments, rubrics, candles, etc. Protestantism is a heresy which consists in rejection of Tradition and the triumph of one's own judgement upon the Word of God. A year or so ago I was accused of protestantism because I was guilty of ''rigidly adhering to antiquity in spite of contrary papal or conciliar legislation.'' Do Roman Catholics not understand the meaning of Tradition? They accuse protestants of selectivism, rejection of proper ecclesiastical authority, etc, but are they not themselves guilty of a similar heresy? It is often the way with diametrically opposed schools of thought, or things - they're exactly the same, suffering the same prejudices and want of reason. Nazism was manifestly much the same as Stalinism, for example. So it is with modern Roman Catholics and protestants. If it boils down to authority then we may we may well ask wherefore the pope has authority sufficient enough to alter Tradition - or if he does, what distinguishes the Word of God from Tradition since both are inextricably linked in the fundamentals of revelation. How is any verse of Scripture exempt from the authority of the pope? Do I exaggerate? Apologists for Papal authority go on and on about the limits thereof, but I am no longer convinced of their arguments. History, which the Roman communion cannot conceal forever, begs to differ. Papal authority as it has been manifested since the 19th century has, in my view, gone way beyond the parameters set by legitimate exercise of authority in the Church, be it that of an ecumenical synod or the delicts of a local bishop. Even in terms of philosophy it has neither been justly exercised nor for the good of the Church.

The stance of the Roman communion on doctrinal and moral relativism is commenable, but is this not just a stinking red herring? It is but to say: ''you must believe this, this, and that; you must also do this, but the pope, Christ's Vicar, is above these rules and can do as he sees fit on a whim. He is infallible, after all.'' Or maybe I've spoken of this before and I am just repeating myself. It is unpopular to think so, but if the pope can decide that folded chasubles aren't to be used on the Sundays and ferial days of Advent anymore, what's stopping him from saying that the doctrine of the Triune God is false? A few weeks ago I had this argument with a Greek Orthodox woman who said that all the pope has to do is ''remove the Filioque,'' and everyone would be happy. Who exactly did she have in mind? Certainly not me! Such a ''trivial'' thing as she seemed to think involves very complex questions of theology and ecclesiology. The Roman church has professed belief in the double procession of the Holy Ghost for over a thousand years. For the pope to simply remove the Filioque from the Nicene Creed would be the height of arrogance. Not only would he be anathematizing hundreds of Western saints who taught contra Graeciae, he would be severely re-shaping Roman Trinitarian theology as defined by the councils to which Rome attaches the name ''ecumenical.'' Does the Bishop of Rome have this authority? What then? Would the pope step down from his exalted position in Christ's Church and pick up where everybody left off in the 11th century? What then was the purpose of the Papacy for a thousand years? Its self-destruction? Would that it were! But no. It matters not that the pope added the Filioque in the first place, or that maybe one day he will remove it, to nobody's satisfaction but the ignorant. The point is simply this: if you question the pope's authority (whether or no you blame the authority of the pope) regarding folded chasubles, or some other aspect of liturgical reform, you might as well question the addition, or removal, of the Filioque. What are the ecumenical implications of all this? Personally, I think that it leaves small hope for the reunion of the Roman and Orthodox churches - but who wants that anyway? I know of many deluded Romans who think little of the Orthodox (''how dare they reject our lovely pope!''), and still more Orthodox who can't abide the Papacy. I can just imagine the Orthodox and the Traddie in conversation about it. After the pope excises the Filioque from the Creed, the Traddie asks: ''so, what do we do now, then?'' The Orthodox replies: ''well, now you abolish Pastor Aeternus and Lumen Gentium.'' ''Why?'' ''Because the Filioque is a fundamentally papal issue. In no other way are our ecclesiologies so far apart as the question of the pope.'' Can any of you see this going anyway? 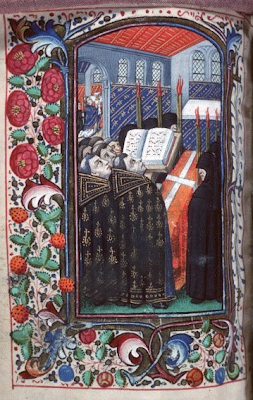 I adore this. It's superb. Liturgy as it should be.

This post has long ceased to have any coherent point, so I'll just round up. A few years ago I went into Holy Trinity church at Long Melford in Suffolk, a masterpiece of the perpendicular style. I marvelled at the church, so beautiful it was, and I looked about me with a profound sense of regret which has never wholly left me, even now when I think that Rome has no actual right to have dioceses in England. It was the feeling of an exile returned after a long absence, looking about at things at once familiar and yet remote, remembering times when he was lord - the typical triumphalist attitude of the Roman Catholic to the Anglican about their own ancestral churches. It put me in mind of the words of Galadriel to Celeborn. You remember her kindly remonstrance about the company of the Ring being caught up in the net of Moria? ''If our folk had been exiled long and far from Lothlórien, who of the Galadhrim, even Celeborn the Wise, would pass nigh and would not wish to look upon their ancient home, though it had become an abode of dragons?'' Even if Roman Catholics eventually got all the old churches back, would the liturgy they brought with them be any improvement? Do they vainly suppose that their traditionalism would be a homecoming? That our catholic forebears would be familiar with their modern liturgical books, statues of St Joseph the Worker and Lourdes shrines?

Well doesn't this show up my lack of skill as a writer! I am actually quite bored with the raison d'etre of this 'blog at the present. I am labouring under a crippling depression, struggling at work, home and university, have suffered a series of setbacks, etc. I can't even concentrate on my Tolkien books. I started reading Book V of The Lord of the Rings about two weeks ago, and haven't even finished The Siege of Gondor. Maybe I should just keep quiet about liturgy. It makes me unhappy and I can't claim to have anything more than a rudimentary knowledge anyway. Let the Ents look to it!
Posted by Patrick Sheridan at 8:00 am
Email ThisBlogThis!Share to TwitterShare to FacebookShare to Pinterest