Two photos, each representing two sides of the Anglican Patrimony. And a petition in the 1552 Book of Common Prayer, excised by our late Sovereign Blessed Queen Elizabeth I in A.D 1559, whose assassination ''saint'' Pius V promised would gain that reprobate heathen safe passage into the Kingdom of God. Fortunately it never came to pass, and the legacy of Queen Elizabeth I is that much the greater. Pius V left us with impoverished liturgical books, paved the way for a new kalendar, and the impression that successive popes could (and would) do whatever they liked with the Liturgy. Elizabeth I, very catholic at heart, made an already great nation very great indeed. 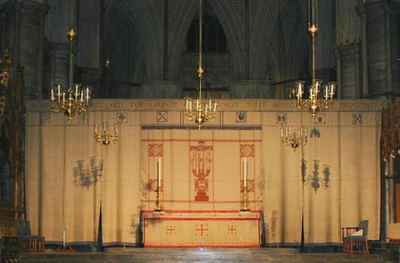 Lenten Array at Westminster Abbey, symbolising the austerity of Lente by the absence of colour. Very simple, very old, ordered to the inspiration of godly piety and the holy fast in imitation of the Lord. Passiontide veiling, a later continental custom, doesn't have quite the same effect, does it?

From all sedicion and pryvie conspiracie, from the tyrannye of the Bysshop of Rome, and al hys detestable enormities, from al false doctryne and heresy, from hardnes of hearte, and contempte of thy worde and commaundement. Goode Lorde, deliver us.

You may ask wherefore this petition forms part of the patrimony, since it was only in use briefly, but the same may later be said of the Novus Ordo of Paul VI, the Quiñones breviary (which inspired the structure of the Prayer Book services), or the liturgical books of 1962 when, on the Day of Judgement, the Lord brings every work into judgement, with every hidden thing, whether it be good or ill. Such reprobate practices as Mass facing the people, irrespective of an eastward facing Altar, rainbow stoles, polyester cassock-albs and other liturgical abuses might be said to form part of the Roman tradition one day, not to mention new and old ICEL, and all 20th century liturgical books; all the stuff sanctioned for use from on high. The Syllabus of Modern Errors and the Oath against Modernity can one day be seen side-by-side with their later revision or abolition by the popes. The fact that popes Leo III and John VIII rejected the Filioque, and the fact that the Filioque now forms part of Roman doctrine; the fact that some of the more distinguished among the papal theologians, such as St Thomas Aquinas (and the Dominican Order, even into the 19th century), rejected the doctrine of the Immaculate Conception, and that this doctrine (distorted by Rome) is now, like the Filioque, set in stone, presents a communion with much less a consistent system of concordant teachings, depending upon and resonating one to another; but rather a mutable, relativistic fudge defended and symbolised by the bishop of Rome, the dispenser of grace and teacher of all Christians. So what shall we say of Leo III and John VIII, defenders of the ancient orthodoxy of Rome? Are they heretics because they did not view the procession of the Holy Ghost through the prism of later innovation? What of St Thomas Aquinas, the most highly influential theologian of the Middle Ages, with his reasoning on the Conception of St Mary the Virgin? Yea more, what of Thomas Cranmer and his Prayer Book? What of all the English Martyrs of the Reformation, such as Ridley and Latimer, who set a candle to burn at the heart of England? Such men as these, remembered by the Church of England, rejected Rome. Will Rome one day accept the Thirty-Nine Articles of Religion, integrate them into her tradition? 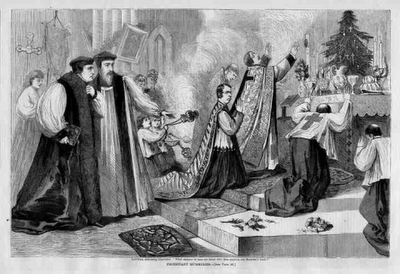 Another example of Patrimony. Notice the Christmass Tree, which the Papists adore and worship; whilst the truly liberated English Church, that has been set free from nonsensical, non-Scriptural superstitions, looks on aghast at such pagan totemism!

Ahhh, the problems of ecumenism and the integration of a tradition utterly at variance with Rome into the Roman communion. Are the Romanizing Anglicans, destined for this Ordinariate, expected to anathematize their fathers and their tradition? What of the tradition itself? Taken of itself, the Prayer Book of the Church of England (which one?) is a masterpiece of English literature, a watered down, protestant compendium of services (although there is room for an interpretation of the Eucharist in an orthodox sense if one reads the words aright - at least that is my opinion). The Collects of the Prayer Book are by no means found in the Sarum Missal, although there are many other elements. Forgive me, but were the Prayer Book the product of 20th century papal reform, instead of 16th century Cranmerian reform, I daresay the Traddies would be less enthusiastic about the Patrimony than they let on. How much do any of them know about it?

Rome isn't interested in the Anglican tradition in any meaningful sense, it just wants converts by means of veiled aggressive proselytism, hence all the ''formation,'' the appalling treatment of the great Fr Hunwicke, and the fact that Mgr Keith Newton now dresses like a Roman prelate. If you saw him, and knew not who or what he was, could even the wisest man tell him apart from anyone else in the Roman hierarchy? Why does he not wear the English cassock, with the Canterbury cap? I could well imagine Rome saying not so much, come to me and I will preserve your tradition, but rather come to me, all ye that travail and are heavy laden, and I will swallow you up. It is true, though. Soon to forget, and be forgotten, forever lost in the papal system.

Just some musings on a Sunday afternoon.
Posted by Patrick Sheridan at 3:00 pm
Email ThisBlogThis!Share to TwitterShare to FacebookShare to Pinterest