The King's Most Sacred Majesty...

In the Year of the Lord 1610 John Speed published his Atlas, entitled The Theatre of the Empire of Great Britaine, wherein he said of the vale of the Red Horse in Warwickshire, a county so dear to Blessed Tolkien 300 years later:


''Meadowing pastures with the green mantle so embroidered with flowers that from Edgehill we might behold another Eden.''

Thirty-two years later, on October 23rd 1642, St Charles The King looked down into that same valley from that same hill and beheld not Eden but an army of traitors bent on the breaking of his power. Sir Edmund Verney stood nigh to The King and had the honour of bearing the Royal Standard. Verney was among the 3,000 who perished in that battle, the Standard being an obvious target, but his body was never found. Of course, a raw body count avails little to convey the tragedy of those days, a strife begotten of heresy twixt father and son, friend and friend, layman and bishop. Only in the high Summer of that year Verney had, in dismay, written that he hoped that The King would yield and find common ground with his enemies, but:


''My conscience is only concerned in honour and gratitude to follow my master. I have eaten his bread and served him near thirty years and will not do so base a thing as to forsake him.''

Tolkien wrote in the 1960s that loyalty, understood as a virtue, became virtuous only when put to the test so to abandon it. I'm sure that when he died Verney was well-rewarded, being received into the Kingdom with the words: Euge, serve bone et fidelis!

But of course, this is not about the Civil War, except by accident. This is about kingship, obedience and the very nature of the Church herself. For that which went to the heart of that cold day, when St Charles, who kept his dignity in defiance of his enemies, took centre stage on the theatre of British history, was the doctrine of episcopacy. From the Cathedral of St Giles in 1637, when Jenny Geddes and the other peasants threw their stools at the Dean who read the Collect from the Prayer Book, even to the scaffold St Charles symbolised the catholicity of the Church united in the apostolic episcopate; and the bloody conflict of those days was a war on Christ's Church. ''It was for the Church,'' wrote Gladstone, ''that Charles shed his blood upon the scaffold.'' John Henry Newman wrote similarly before his apostasy to Rome, though I cannot presently remember the sermon (I wonder what his views were after 1845?). 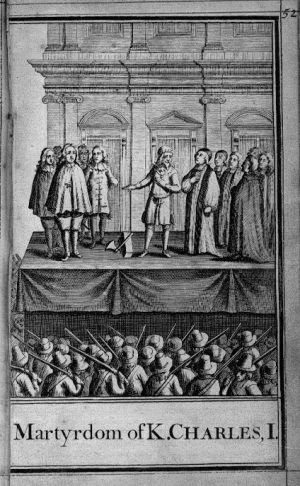 On the morning of January 30th 1648, St Charles was led through the Banqueting House with the Bishop of London, who had arrived early to read Mattins with The King and administer the Blessed Sacrament. It was dim inside; the windows were boarded up, the glorious Rubens ceiling, which immortalised the reign of James VI and I and told aright the meaning of Kingship, mortified by the dark. After some delay, at two o'clock The King stepped onto the scaffold and spoke to the people, saying that he had desired only their liberty, but: ''...their liberty and freedom consists in having government. It is not their having a share in the government; that is nothing appertaining unto them. A subject and a sovereign are clean different things.'' His last word, uttered mysteriously to the Bishop of London, was ''Remember!'' I find this heartening, and on so solemn and serious a day we do well to remember, for Tradition itself is Memory, even as found in the writings of Tolkien; solemn and waking remembrance of the traditions we have received in Christ. It is by this waking memory that Christ is present among us. ''I die a Christian,'' said St Charles, ''according to the profession of the Church of England as I found it left to me by my father.'' He died well and in the fear of the Lord; unlike Oliver Cromwell, the base master of treachery, who died writhing in agony.

Does anybody know why Victoria removed St Charles from the Prayer Book?


Please forgive these halting words.
St Charles, King and Martyr, pray for us.
Posted by Patrick Sheridan at 6:00 am
Email ThisBlogThis!Share to TwitterShare to FacebookShare to Pinterest