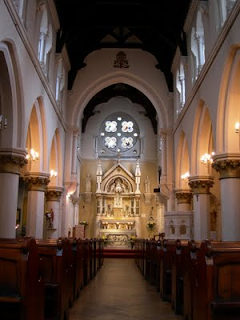 It's a weekday evening. It's the feast of the Sacred Heart of Jesus. There is a high Mass according to the 1962 missal in a dingy church in the heart of the City. At the front pew are sat three figures. One, a woman in fact, who is always early (in order to have a chat with father), and two men, though they are not together. The woman is grotesque and a sycophant (well, they're all sycophants) and is sat right at the centre, as close to the sanctuary as humanly possible. There is one of these in every parish; you know the sort - a bully who hangs around the priest like a bad smell, sticks her nose into every aspect of parish business, and is obsessed with every word which comes from the mouth of her lord pope (and the sacerdotal phallus, I shouldn't wonder), likes to feel important. I wrote about one two years ago. Next to her, though a little way down as madam likes her space, is an ignorant man clutching an old missal while pretending to know his place in it. He is a used car salesman, would have us think that he is an expert (though his ''expertise'' is derived solely from a few pages in his 1958 (it's before the wicked Council!) copy of ''Fortescue,'' Michael Davies and the LMS magazine), tries to conceal his accent, drinks cheap wine, and likes to go home feeling fat and important at having once again witnessed to the papal lies contained in Summorum Pontificum and being part of a clique. It's that sort of ''I go to a traditional Latin mass every Sunday, my life is so wonderful'' triumphalism that puts people off religion. A wet brown paper bag of a man, who bows to the Lady Altar at every mention of St Mary - the quintessential closeted homosexual. Next to him is a nutcase whom nobody likes, a crypto-sedevacantist who believes that pope Paul VI lives somewhere in the jungles of Brazil, that the pope's cassock is actually made up of tiny white neo-Modernist demons, and sits in his armchair slapping himself and muttering when not making intercession unto Pius XII to deliver the church from the heresies of Vatican II. He lives with mummy, of course.

Mass begins as usual, with madam trying at once to sing with the amateur choir who can't sing in tune and copy the ministers at the altar. Bag man flicks through the pages of his missal and occasionally looks up and around to make sure people aren't observing his idiocy, while the nutcase sits back in his pew and drools out of the side of his mouth. The deacon of the mass trips over his lace curtains as he ascends the altar (serves him right as he began the ascent with his left foot), and is assisted back to his feet by the MC, a wise and benevolent man who is stuck in that unfortunate milieu. Mass continues with the usual cock ups, one part idiotic rubrics of the 1962 missal, two parts incompetence of the ministers. The MC turns to one of the acolytes and sighs audibly as the deacon struggles to pronounce the Latin of the gospel. 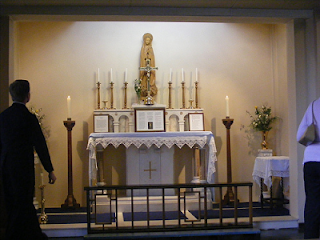 Then comes the sermon! The topic of the sermon is ''BVM so wonderful that she actually took her Son's place on the Cross,'' but somehow the preacher drifts into a rant about the evils of homosexuality, making intercession to the sacred foreskin, quoting the decrees of popes and trying desperately to conceal both his camp lisp and the identity of his own secret male partner. Of course, madam sat listening with a grin so ugly that it quite unnerved one of the servers, who turned away in disgust. Credo III is intoned by the celebrant and madam takes over, drowning out the sound of the choir and everybody else in the congregation. Bag man lets on he knows the words by chanting Patrem omnipotentem at the top of his voice and then moving his lips up and down; once again hoping that nobody sees him. Nutcase just sits there. The offertory comes and those half asleep in the congregation are woken to the sound of a great crash from the sanctuary - the clumsy deacon has only dropped the chalice! The MC rushes to the sacristy and collects a fresh host and purificator, as the deacon had trodden on both, and the mass continues. Bag man goes around with the collection plate - his way of getting out having to put any money in. A hush falls over the congregation as the celebrant reads the Canon, genuflects and elevates the wafer. Madam looks up and with abundance of tears says ''my Lord and my God'' as she worships the wafer. Bag man looks around with an expression that says ''where are we now, then?'' Nutcase stares at a man in another pew with a look of contempt.

Mass over, madam marches uninvited into the sacristy to help clear things away, and presenting the celebrant with a plastic set of beads, bought from the ''holy shop'' especially, she asks him to bless them. She then goes to wait outside to stop him again later. Meanwhile the bag man in his hideous overcoat comes up and congratulates everyone on a splendid mass, so wonderfully traditional and redolent of the liturgy of old Sarum (though devised not in such terms). The nutcase nods to the statue of the Sacred Liver and goes out to be tragically knocked down by a speeding motorist.


The sad thing is that this is based on real life experiences.
The photos are of churches to which I went often at one time. In fact, though I did not know that the photo existed until just now, the chap in the cassock standing on the north side of that ''lady altar'' is in fact me.
Posted by Patrick Sheridan at 4:04 pm
Email ThisBlogThis!Share to TwitterShare to FacebookShare to Pinterest