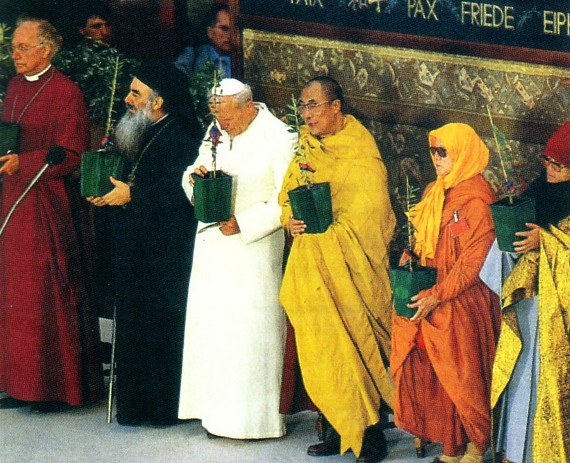 What happened to the age-old prohibitions against praying with heretics, schismatics and infidels?

Do I get the impression that by these infamous canonisations people think that pope Francis has cast down a lamp and declared a new dark age to have begun? The canonisation of two 20th century popes can hardly be any different to the canonisation of Pius X, surely? The pope-emeritus has already declared Pius XII to have been "venerable." If wonders can be attributed to that man at all then they must have their uttermost origins in the Devil, whom he undoubtedly adored. Of course, it makes no difference to me. The popes can declare whomever they like to be saints; that doesn't make them so since the antient bishoprick of Rome is fallen and in any case I find the modern canonisation process quite ridiculous. It seems, to me, that the Traddies are hesitant about John XXIII and John Paul II because they are popes of the wicked Council. Quid plura dicam? 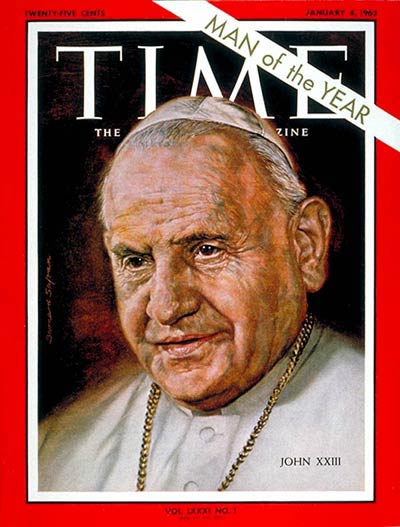 Woe unto you, when all men shall speak well of you! For so did their fathers to the false prophets. Luke 6:26.

Many popes of Rome lived godly lives. Leo the Great is a good example. Why is he a saint? Well, perhaps because he saved the City of Rome from Attila's hordes; perhaps because he wrote the most eloquent Latin sermons I have ever read; yea more, because he tirelessly defended Orthodoxy and lived a Christ-like life so that we may rejoice humbly to cry blessed Leo, pray for us! On the other hand, if changing the Good Friday prayer for the faithless Jews or being anointed by a Hindu priestess are pathways to sainthood then never mind about what the Scriptures say! If the pope, as "supreme legislator," can change the strictest criteria of salvation then we're all just fine, aren't we! Nevertheless, as a friend of mine noted recently, John Paul II excommunicated Marcel Lefebvre so he must have had a streak of decency in him somewhere, pushed down and buried deep beneath the trappings of popery and all the shewing off for which he was renowned. John XXIII always struck me as a kindly old man largely ill-used by his subordinates.

As I have said, it makes no difference to me. I am under no delusion that God welcomed either Roncalli or Wojtyla into the Kingdom with the words Euge, serve bone et fidelis! I merely point out that the Roman church, under this popular new pope, has sunk to a new low. During the visit of pope Benedict to Britain, I saw a priest get up from his chair and kneel to receive a blessing he saw the pope give from a television screen. The fact that mine eyes were wide with disbelief is irrelevant; I just wonder if this man would do the same if pope Bogroll came onto the television and began Sit nomen Domini benedictum? It's a perfectly reasonable question. It just seems that traditionalists have a rose-tinted vision of the Papacy and its occupant which was justified during the pontificate of Benedict XVI, the time of their ascendancy, but dispelled entirely with the coming of this South American peasant. The reaction on Rorate Caeli to the election of pope Francis was surely telling. Why? Because Benedict and Francis are two very different people, and their respective pontificates are a clear reflection of this difference whether you're prepared to admit that a pope's private theological opinions or liturgical preferences can push the official church doctrinal or liturgical pendulum in the undesirable way or not. It is the essential problem of the Papacy.

By canonising these two conciliar popes, Francis is sanctifying a period in church history in which the traditionalists were largely sidelined and their bastardised rites treated (rightly) with suspicion. No wonder the Traddies can't stand it! But on a human level it's also a question of embarrassment. John Paul II was a patsy in some respects but even he had an air of intelligence and dignity. John XXIII was a fat provincial man (although to be fair in Italy that is by no means as derogatory as it would be in England). The traditionalists are embarrassed by a man who seems to have verbal diarrhoea and by consistently shooting off at the mouth is bringing official doctrine into question...not that that ever counted for much! I mean, when did you ever hear a priest preach against women wearing trousers? But heaven forbid that you didn't shew up to an abortion clinic to wave a placard! I expect only such as Richard Williamson would have the gumption to do that, having cast off all credibility anyway.

I wonder if the Traddies have begun substituting the collect Pro Papa for Ecclesiae yet? I know at least one traditionalist who doesn't recognise Francis as the "true pope," and by extension all his canonisations, decrees, etc. He is an old man but with hope the scales might fall from his eyes and he might start crawling to the doors of an Orthodox church seeking the Sacraments there. The Papacy is redundant. It is time for all to admit that the West has failed, failed utterly and to turn Eastwards in prayer, saying God, for thy great Mercy, give Grace! Have Mercy on me, a Sinner!
Posted by Patrick Sheridan at 7:00 am
Email ThisBlogThis!Share to TwitterShare to FacebookShare to Pinterest