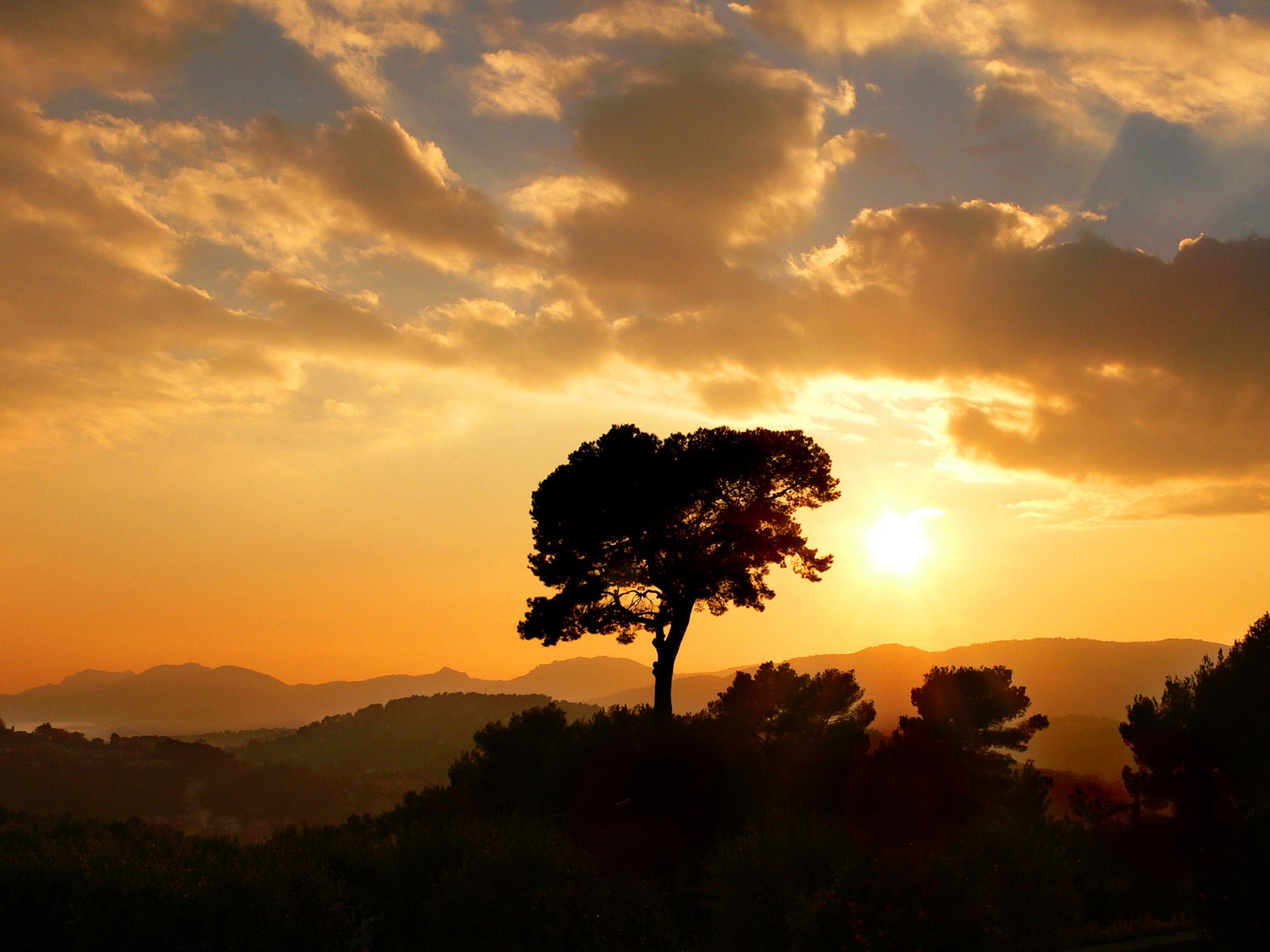 This tree is by no means significant. I tried to find something reminiscent of Tolkien's description of Gandalf before the Balrog in Moria; you know, the wizened tree before the onset of a storm, but Google Images yielded nothing worthwhile, and this sunset is unduly optimistic.

On Monday 17th March I started a new job...for a bank and in the branch network. An odd choice, confessedly, for somebody who doesn't understand the concept of money and holds the general publick in contempt. Until recently I was happily oblivious to such things as interest rates and premiums. Now, since this Mammon stuff is now needful for me to know, I have found that it is forcing a lot of useful things out of my head; things like dates of birth and trying to draw a square with a St Andrew's cross amidmost without going over at least one line twice. I have been in the branch for these two (or is it three?) weeks now. On the first day I fainted after the 10 o'clock meeting and was taken by ambulance to hospital - a first for me. I went back the next day, having successfully made a memorable first impression, and found that I have significantly less in common with my new colleagues than anybody else. My appearance has certainly raised a few eyebrows. I took off my glasses to rub some sleep from my eyes and one of the managers said: "have you thought about contact lenses? You're quite handsome without glasses." This I took as less a compliment or, worse, a flirtation as a veiled attack on my deliberate Dame Edna Everage look, which I will not change. I said "no," as though I had answered fully, and moved on. A young Russian woman is also in the branch. I had to do some observations one morning and watched as she typed out a memo or e-mail. She made a spelling error, which I corrected, but she complained that I was being racist or at least that was the "danger" explained to me by my line manager, to whom she turned being, understandably, deeply hurt and offended. It's outrageous! Imagine a native speaker of English, in a moment of kindly remonstrance, daring to correct the spelling of somebody whose introduction to the language was probably some council estate! When my manager informed me of this and asked for my thoughts I didn't give them - I wrote about a cheese sandwich on here instead - I just agreed to make more of an effort to...what did he say?...reach out and connect with people and be more wary in future. Clearly, I am doomed. I cannot even pretend to be a normal person online let alone in the flesh.

They're not all bad. A Nigerian man is very jolly. He is a practising Baptist with a seemingly encyclopaedic knowledge of the Bible. I complemented him on being a Baptist because, for a protestant sect, they baptise people in a traditional manner. I think he assumes I am a Baptist too since I haven't told him where (or even whether) I go to church and he seemed satisfied with a few scriptural quotes on my part. He and I are both fond of pope Francis; he for the pope's apparent lack of pretence, me for the fact that his piscatory ring is wrought of silver - a far worthier substance than gold (unlike gold, silver does not have a Morgoth ingredient). Another Nigerian Baptist, a woman, is very kind; always concerned about whether I have eaten and that I am comfortable. A young Indian man has also been very helpful.

To-day (Thursday) I was away from the branch, on a training programme. The training manager is funny and actually quite attractive, which makes attendance easier, but I find it difficult to comprehend how he can parrot all the acronyms, mantras and hackneyed lines, on a seemingly day-to-day basis, about being courageous and acting with integrity, connecting with people and all those other things without losing something like his hair or self-respect. To-day he spent at least an hour talking about how we can help customers realise their "hopes, dreams and ambitions." I was talking to an equally disillusioned new recruit, a woman the same age as me (but with the added baggage of two children), and we both agreed that banks are sterile, mortifying places we'd rather have nothing to do with. Even more perceptive, somebody else wondered how we could possibly advise customers with a net worth in excess of £100,000 on how to manage their finances given the obvious discrepancy in our incomes. I am certainly in no position to do this given my cavalier attitude to my own accounts. I don't even open letters from my bank.

I applied for this job because I was unemployed. When I made the application I had no real hope that I would even be shortlisted, let alone be successful at the interview stage. Now that I have gotten the job I am worried. I am worried because of my woeful ignorance of the financial sector; I am worried because I was in my last job for eight and a half years and I am, therefore, not used to being new and ignorant. When I worked in that God-awful supermarket I was respected for my knowledge and experience and even feared - by most men, I am told (this may have had something to do with my being queer but it's more likely to have been a case of reporting directly to the general manager). I think that my oddities were tolerated because I was like the furniture and shewed no signs of leaving. But I did leave. I don't like change or starting anew. It took years for me to accustom myself to that piss-poor job; now I have to do that all over again. The money is slightly better but the responsibility is treblefold. I hope I can find something else, even within the bank, where the virtue of laziness is meritable. Who wants to work for their living? 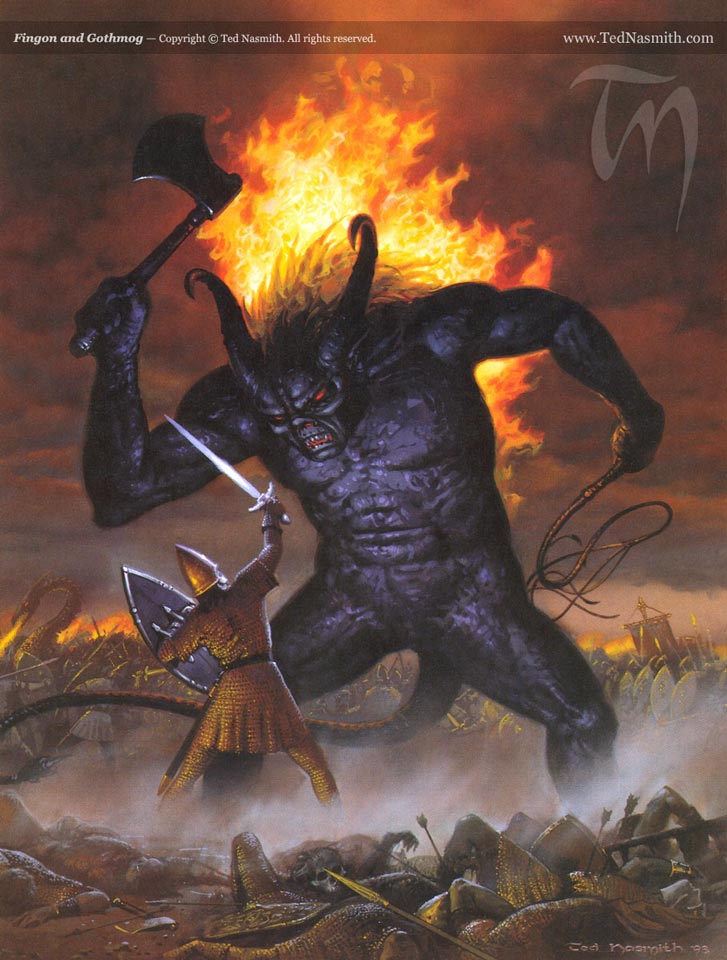 This is Ted Nasmith's rendering of the battle between the Elven-king Fingon and Gothmog, Lord of Balrogs. It could also be my staring the monster of publick contempt in the face? No prizes for guessing who wins the contest...

To-day we were asked to elaborate on our own "hopes, dreams and ambitions." I had to be frank when I said that I had none. I never did. You see, life is something for which I never asked and to date I have had very little enjoyment of the process of life. But people don't understand this. Some people don't even believe that I am autistic. When you're constantly at variance with other people, and yet you depend upon them for your survival (this is not necessarily an allusion to my parents), what happens to your character? Do you know that I get lost at times even in London? I cannot visit places to which I have never been without doing a "dummy run" with somebody else (usually my mother) beforehand, in order to determine various things like the location of the bus stop, the number of street lamps, etc. So you can imagine what starting a new job is like. I haven't had these experiences in nearly ten years and hoped never to have them again. So regarding having any such hopes, dreams and ambitions, maybe it's enough for me to hope that by the time I am thirty (only four short years away), I am not jobless and entirely alone. I have no real future plans. I certainly don't waste any time or money upon preparation for a barely tolerable old age in the form of a pension plan. I guess I just want to be able to stagger on in peace.
Posted by Patrick Sheridan at 9:00 am
Email ThisBlogThis!Share to TwitterShare to FacebookShare to Pinterest