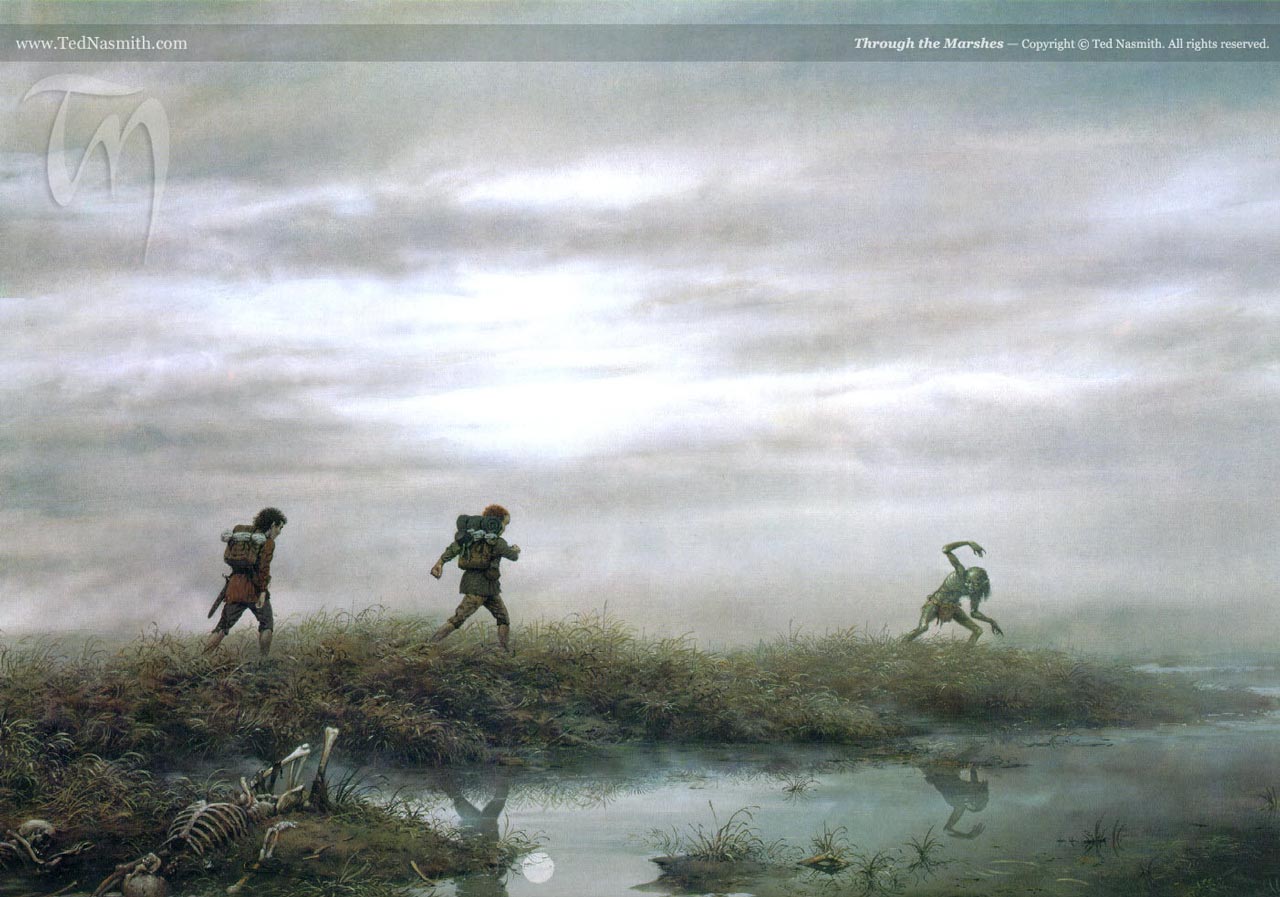 You know, these days there are only three liturgical services in the Roman Rite to which I would go gladly. They are the ceremonies of Palm Sunday, the ceremonies of the Paschal Vigil on the morning of Holy Saturday, and Pontifical Mattins and Lauds of the Resurrection (the latter simply because it no longer exists and not out of especial preference). I find the rest of the Roman Rite rather grotesque, to be frank, and so irretrievably riddled with popery as to be not worth one's trouble. Still, I suppose it is fitting to compare the "achievements" of Pius XII to the lands about Mordor:

"Before them dark in the dawn the great mountains reached up to roofs of smoke and cloud. Out from their feet were flung huge buttresses and broken hills that were now at the nearest scarce a dozen miles away. Frodo looked round in horror. Dreadful as the Dead Marshes had been, and the arid moors of the Noman-lands, more loathsome far was the country that the crawling day now slowly unveiled to his shrinking eyes. Even to the Mere of Dead Faces some haggard phantom of green spring would come; but here neither spring nor summer would ever come again. Here nothing lived, not even the leprous growths that feed on rottenness. The gasping pools were choked with ash and crawling muds, sickly white and grey, as if the mountains had vomited the filth of their entrails upon the lands about. High mounds of crushed and powdered rock, great cones of earth fire-blasted and poison-stained, stood like an obscene graveyard in endless rows, slowly revealed in the reluctant light.

"They had come to the desolation that lay before Mordor: the lasting monument to the dark labour of its slaves that should endure when all their purposes were made void; a land defiled, diseased beyond all healing - unless the Great Sea should enter in and wash it with oblivion. 'I feel sick,' said Sam. Frodo did not speak." (The Lord of the Rings, Book IV, Chapter II).

C.S Lewis, upon reading this passage, remarked that no one could have conceived of this landscape had he not seen the battlefields of the Western Front. When first I made this comparison, however, I still loved and revered the Roman Rite. Now I would say that Pius XII changed the situation, not the landscape. If we're conditioned to believe that the Tridentine innovations in Holy Week (brought in, I suppose, to drag the antient ceremonies of this solemn and serious time down to the level of the rest of the Roman Rite), for example, are essentially beautiful and necessary when in fact they are ruthless grotesqueries forced upon us by the tyranny of bad theology, then really we were already in the graceless wilderness to begin with. A rose by any other name, but in reverse, if you like. On Spy Wednesday of 1956 Tolkien bemoaned the senseless violence wrought against Palm Sunday (I have deduced that since nobody had yet experienced Good Friday (in my opinion the worst of the lot)), and I share his frustration. I really do. But I think now that defence of the Roman Rite, in whatever form, is tantamount to defence of the Papacy since the two are so inextricably linked over centuries of misery. I suppose what I am trying to say is that there is a fundamental cognitive dissonance between accepting the Filioque and all subsequent liturgical and doctrinal developments in the West and objecting to Urban VIII's hymns or the Pius X breviary or Palm Sunday in red, whatever you like.

Besides, by going to church you risk having a conversation with someone.

Art: Ted Nasmith. I couldn't find anything else. Ithilien is too pretty and would not illustrate the point.
Posted by Patrick Sheridan at 9:00 am
Email ThisBlogThis!Share to TwitterShare to FacebookShare to Pinterest