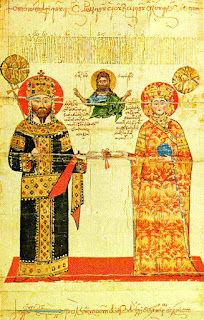 As you know I didn't really go to Dol Amroth but, except, perhaps, Balar, I could think of no Tolkienism for Kefalonia and Homer's Ithaca. And we know almost nothing about Balar than that it is no more. And as for "Homer's Ithaca," whether in fact Odysseus lived there is debatable. I choose to believe that he did but it's impossible to say where. I went to the Ionian Islands last week armed with my Novum Testamentum Graecae, my copy of the Odyssey (an OWC translation), and Brideshead Revisited, which I hadn't read for many years, for the hotel. I didn't care to bring any Byron but I did notice some tourists taking photos of his statue in Lassi, or was it in Kioni? I forget.

Kefalonia is surprisingly unspoiled but I understand that with the Nicholas Cage film "Captain Corelli's Mandolin," its fate might eventually go the way of Ibiza and the other popular tourist destinations for young (and old) layabouts that just confirm my sincere belief that the working class should not be allowed overseas (more on that some other day). Ithaca is a paradise. There is no airport, no schools, no hospital and a population of something like 500. Going up about five hundred feet into the mountains there I saw (and smelt!) rosemary, thyme and lavender in abundance, olive groves, cypress and fennel; the unclouded sky and the sapphire sea. From the belfry at Kathara monastery, the residence of one elderly monk, I reckon I could see forty miles on a clear day. It was more than my desire. I stayed two nights in Ithaca with Homer and went to Vespers in Stavros, at which I prayed before the beautiful reliquary of St Joachim the Ithakan. I broke my fast on the last day on the shores of the sea in Kioni and indulged myself on the most delicious pistachio ice cream in Stavros. Early on Sunday morning I went down to the quayside in Argostoli and saw loggerhead sea turtles feeding (and fighting!) by the fishing boats. I went thence to the (slightly abridged) liturgy in St Gerasimos. I can't think why but an elderly lady shook my hand afterward. I had a brief chat with one of the archpriests and I found out that he used to serve in Moscow Road, albeit before I was born. Small world, eh!

It surprised me that just down the road from St Gerasimos is a Latin rite Roman Catholic church dedicated to St Nicholas. What did not surprise me was that it is the ugliest church on the island. I spoke about this odd little chapel, in halting modern Greek, to a young waitress in the town square and she said that in her view Roman Catholic worship is a bit of a "cop out" (that's verbatim) because it's so brief and that the people who worship at St Nicholas' aren't really Greek anyway. Cynics might point out elements of phyletism there but it seems a fair assessment to me.

I spent most of Sunday dosing on the terrace at the hotel. I figured, perhaps rightly, that nothing would be open in the town, and I have misgivings about the propriety of certain undertakings on the LORD's Day so I ate peaches and read Brideshead when I returned to the hotel after breakfast. In the evening I went swimming in the sea. I found a quiet taverna at the top of a hill at which I would eat supper and drink ice tea.

There is so much else to say but I don't wish to bore you. There were significant problems in getting home. It took about 27 hours, notwithstanding the time difference, and I ended up in Rome, of all places, specifically at the Hotel Divino Amore, a place for impoverished pilgrims. I had a lovely view of the motorway from my room with the bed, soft as the slab, upon which I got cramp in the small hours. The place wasn't the best way to end a miserable day. The reception area had an huge portrait of pope Francis and there were other tawdry tokens of popery littered about the place. I felt hemmed in. The contrast with Orthodox Greece, just a few hundred miles away, was astounding. Needless to say, I saw nothing of Rome herself and would not have spoiled the pleasure with haste, even if I did have any clean clothes and money left to spend. The best thing about my time in Rome were the men and boys at the airport.

Why did I go (to the islands, not Rome!)? I expect you're thinking. Well, I've been so terribly listless and idle for so long. Since my sacking, yea more since I gave up work altogether, I have been wasting time and money. I have become a wastrel and good for nothing. I have put on weight, so much that even shirts I bought two years ago no longer fit. I feel gross, stupid and unattractive and I don't like feeling that way anymore. So I have decided to do something about it. My money is now gone. I have exhausted my overdraft and the bank won't let me extend it because I have no income but I am not worried about that right now, just about my physical health and appearance, and my religion. If I learned anything in Greece from observing and partaking in Orthodox worship there, it's that it is for me. As an Englishman I resent ethnic chapels in London; naturally. But there is something profoundly natural, innate, essential about Orthodox worship in situ. I don't mean that Orthodox worship should be just Russian or Greek but it does go against the grain in converted Anglican churches, half in English (with competing translations), half in Slavonic or Koine Greek, with all the other problems that go with multiculturalism. I think we should all become Orthodox, to be honest.

On a tangential subject, Greece has been in the news recently over its money troubles. I experienced little of that on the islands. Most of the banks I saw were open. Nevertheless, do keep the Greeks in your prayers.

Art: Wikipedia. I saw the Byzantine double-headed eagle in many places. It represents two of the things I most believe in, namely Church and State.
Posted by Patrick Sheridan at 9:00 am
Email ThisBlogThis!Share to TwitterShare to FacebookShare to Pinterest