Sunning on the beach... 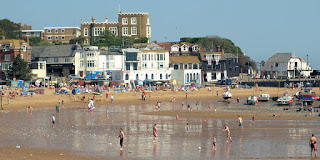 This article by Dr Michael Scheuer is a brilliant and succinct analysis of the last week's events. A sample:

"...Cameron, Obama, and most Western leaders will publicly speak as if their nations, populations, and military capabilities currently equate to the united and powerful nation-states they were during the Cold War. They will speak in this manner because they are willing to lie to hold onto political office. In reality, most Western nations are bankrupt; each has knowingly eroded its national unity, internal security, and societal cohesion by allowing nearly unlimited immigration by people who refuse to assimilate and who are often anti-Western; and most have degraded their militaries by starving them of much-needed cash in order to pay for social services and fanatically pursue the nation-killing policies of diversity and multiculturalism."

No wonder Dr Scheuer's enemies think he's a stupid nuissance. He sees more clearly than them!

The photo is of Broadstairs beach. I was there on Wednesday and spent much of the time bemoaning the lack of public indecency laws in this country.
Posted by Patrick Sheridan at 9:00 am
Email ThisBlogThis!Share to TwitterShare to FacebookShare to Pinterest