The Wanderings of Húrin... 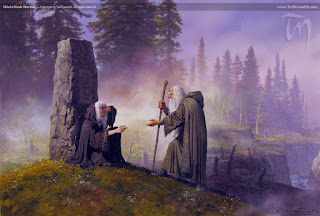 "The night-sentinels saw him, but they were filled with dread, so that they did not dare to move or cry out; for they thought that they saw a ghost out of some old battle-mound that walked with darkness about it. And for many days after men feared to be near the Crossings at night, save in great company and with fire kindled."

'"Grief darkens your eyes, lord, dare I say it. But lest this should prove true, let us take counsel together. For I see peril of evil ahead, both to thee and to my folk, though maybe wisdom may avert it. Of one thing I must warn thee, though it may not please thee. Hardang is a lesser man than his fathers, but I saw no evil in him till he heard of thy coming. Thou bringest a shadow with thee, Húrin Thalion, in which lesser shadows grow darker.'
"'Dark words from a friend!' said Húrin. 'Long I lived in the Shadow, but I endured it and did not yield. If there is any darkness upon me, it is only that grief beyond grief that has robbed me of light. But in the Shadow I have no part.'
'"Nevertheless, I say to thee,' said Manthor, 'that it follows behind thee. I know not how thou hast won freedom; but the thought of Morgoth has not forgotten thee. Beware.'"

These quotes are from "The Wanderings of Húrin," which forms part three of volume XI of The History of Middle-earth. They illustrate something of Morgoth's dispersion, I think. It is true that Húrin had no part in "the Shadow," as he says; nevertheless, as with all thralls in Angband, Morgoth's power was upon him and his life was in ruin. Indeed Morgoth had cursed Húrin "with dread curses of the Valar," as the Lost Tales say. And it's interesting what Manthor says about the influence of the Shadow that stalked Húrin; that it could enter men's minds and insidiously affect their moral choices. But alas! These writings do not form part of the Quenta Silmarillion.
Posted by Patrick Sheridan at 9:00 am
Email ThisBlogThis!Share to TwitterShare to FacebookShare to Pinterest