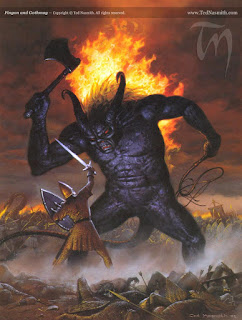 There are a number of references in Tolkien to evil being, as it were, a centre which draws all evil things to it. There's this:

'"Yes, to Mordor,' said Gandalf. 'Alas! Mordor draws all wicked things, and the Dark Power was bending all its will to gather them there. The Ring of the Enemy would leave its mark, too, leave him open to the summons.'" The Lord of the Rings, Book I, Chapter II.

"Now Morgoth, having achieved his malice against Valinor, and escaped from bondage, gathered again all his servants that he could find; and through all the North ran the news that he had returned. From near and far, from the ruins of Utumno, and from deep dales and shadows under the mountains and from all dark and hidden places they crept back to him." The Later Quenta Silmarillion (II), chapter VII.

There is another, one that goes into far more detail, but I cannot find it for the life of me. It says something like evil is a wave or that Melkor, standing in the North, sends out some sort of signal, or sends out his influence, and then draws it back to himself, drawing not necessarily things evil but lesser wills that he can manipulate. I'm afraid I am at a loss. So I am appealing to my readers. Anyone familiar with The History of Middle-earth, please comment below your suggestions.

Art: Ted Nasmith. No prizes for guessing who wins!
Posted by Patrick Sheridan at 11:52 am
Email ThisBlogThis!Share to TwitterShare to FacebookShare to Pinterest