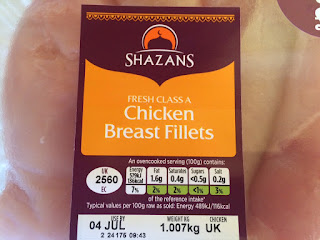 UPDATE: I should very much like to know what the mainstream churches have to say about this. I can't imagine they really give a crap, to be honest.

You might say I am a fussy eater. You might say I am conscientious. You might think it hypocritical for a person (I have always found it difficult to say "man") like me to feel so strongly about this seemingly ephemeral issue when I profess carelessness about so much else.

Let Muslims eat halal meat if they want. It has nothing to do with me. Just don't bring it into my house and expect me to eat it.

"What?! Surely chicken is just chicken?" Asks the secularist.

And there it is. Those six words could not convey more the reality of our disintegration into apostasy and barbarism. The apathy about certain ethnic foods in the West is not just a symptom of multiculturalism. It is the prime token of a complete lack of conviction and belief in God. Most people who have anything at all to say about halal object to labelling and such things on "animal rights" grounds; the same people who lobby against foie gras for example; and the propriety of eating the flesh of an animal that has been sacrificed to a Middle Eastern tribal deity soundly rejected in the West does not enter their imaginations. And when the point is pressed they don't care. But I do; I do care! The trouble is, my convictions are treated as frivolous and prejudiced. But that's not surprising. When eating is reduced to a bare necessity to keep functioning in a pathetic, meaningless life in which our actions have no consequence beyond their immediate effect (the secularist position), what does it matter what we put in our bodies? Does St Paul's admonition about fellowship with devils have any significance beyond the apocalyptic days of early Christianity? It's marvellous that everybody hates the Muslim world nowadays but nobody seems to care about eating Muslim food. Am I just a lonely voice in the wilderness? Does anybody else feel as I do? Comment below!
Posted by Patrick Sheridan at 3:58 pm
Email ThisBlogThis!Share to TwitterShare to FacebookShare to Pinterest