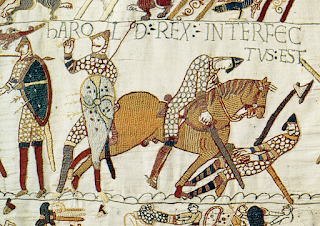 Initially published on 15th December 2012 but still relevant. I am reminded of the historic might-have-beens I mentioned the other day. Gimli mentions that, of course, in the aftermath of the Pelennor.

Blessed Ronald Tolkien's antagonism to France, the French, French cooking and the French language (he thought modern French was hideous, and compared the beauteous and superior grammatical style of Old English to Norman French in one of his lectures, disparaging the latter as a ''vulgar patois'') was due to his regret that English culture was dislocated and nearly destroyed following the ruthless, completely successful, conquest of England by William the Papist in 1066. One only has to read The Lord of the Rings to see how thoroughly English the great work is. For Tolkien, the Norman Conquest impeded the survival of a distinctly English language and corrupted the ideal of English life. Indeed, the very lexicon Tolkien uses in the legendarium seeks to eradicate the linguistic impact of the Conquest - there are no latinisms in Tolkien. The language of the Eorlingas, for example, was based on Old English, but such was Tolkien's mastery and genius that it was Old English without French or Latin influence. A famous Old English word would be ''were,'' which is derived from the Latin ''vir,'' which comes down to us today in words like ''virtuous.'' But why use such words at the expense of an English equivalent? Why use ''laudable'' when you can use words like ''praiseworthy,'' instead? Blessed Adrian Fortescue applied exactly the same principle in the introduction of his book on ceremonies, retaining Latin words such as Sanctissimum where appropriate, but flatly refusing to use Italian words like bugia, cotta, etc, and Latin for the sake of Ultramontanism (such as you find in Dale's poor translation of Baldeschi). A work ceases to be a real translation if you litter it with foreign words.

It has come into my mind in the last day or so that some elements of the Battle of Hastings found their way into the Battle of the Pelennor Fields, specifically a comparison between the death of Blessed Harold the Martyr, the last Orthodox King of England, and Théoden, King of the Mark. As depicted in the Bayeux Tapestry, King Harold was pierced by an arrow in the eye and was cut down by impious Norman knights who hewed his body, treading his banner into the mire of his blood. The Normans refused to surrender Harold's body to his mother for burial, even though she had offered them a weregild in token. A cherished tradition has it that later the monks of Waltham Abbey with Edith the Fair, Harold's consort, came to the battlefield and searched the bodies of the slain for the fallen king, by marks on his chest known only to Edith. They found the body and had it brought to the Abbey, where the monks buried him with fitting rites and prayed for his soul. Norman propaganda during and after the Conquest portrayed King Harold as a despoiler of churches, but clearly neither the monks nor Edith thought so. 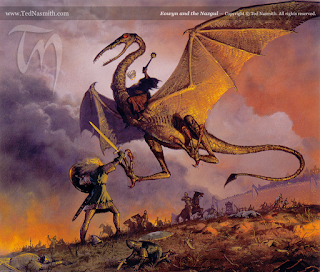 Tolkien's account of the Battle of the Pelennor Fields is very moving. From King Théoden's charge into the ranks of the Dark Lord, where his countenance shone as the Sun, how he was borne up upon Snowmane as a god of old, even as Oromë the Great in the Battle of the Valar when the world was young, how the Eorlingas sang songs with the joy of battle upon them (the Saxons chanted Psalms as they awaited the onslaught of the Normans who marched beneath the Papal banner), that the sound of it was fair and terrible and came even over the walls of Minas Tirith; even unto his glorious death, unafraid of the dark, though his knights had all but deserted him, the Eorlingas are praised as the virtuous, the bringers of light to dispel the shadow of death. Of course, like the fateful arrow which felled Martyr-King Harold, Théoden's horse was pierced with a black dart from the air. Edith's reverence for the body of her lord, shamefully mutilated by the Normans, is brought forward by Tolkien in the person of Éowyn, who alone came to defend the body of the King, rebuking the Nazgûl (a lord of Númenórean origin corrupted by greed, much like Duke William himself); even as a convocation of Bishops in Normandy in 1070 rebuked those who fought on the battlefield of Hastings for Duke William, imposing penances on them; ironically men who fought with Papal blessing! Éowyn's rebuke is interesting from a philological perspective, since she calls the Nazgûl ''dwimmerlaik,'' and ''lord of carrion,'' admonishing him to leave the dead in peace. The word ''dwimmer'' occurs at several points in The Lord of the Rings, and seems to refer to black sorcery or necromancy. Here Éowyn rebukes the Nazgûl, who undoubtedly would have mutilated the fallen king, as an unholy phantom and sorcerer, whose power over the dead had its uttermost source in the Devil - clearly to rend the body of the fallen was a thing unspeakably evil. 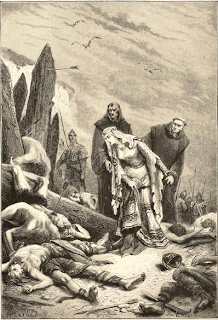 Out of doubt, out of dark, to the day's rising
he rode singing in the sun, sword unsheathing.
Hope he rekindled, and in hope ended;
over death, over dread, over doom lifted
out of loss, out of life, unto long glory.
So sang the lords of the House of Eorl, in a song probably accompanied by harps, at the King's burial, and composed in the Saxon tradition of unrhymed rhythmical lines tied together internally by alliteration. And so in a sense Théoden's death can be seen as a retelling of the death of godly king Harold, and it shews with what reverence Tolkien treated the Martyr King and with what contempt he held those who impiously killed him, Duke William and his guard heaped together in the Lord of the Nine Riders, who went to battle under the banner of the Red Eye.
Are these ravings?
Posted by Patrick Sheridan at 9:00 am
Email ThisBlogThis!Share to TwitterShare to FacebookShare to Pinterest