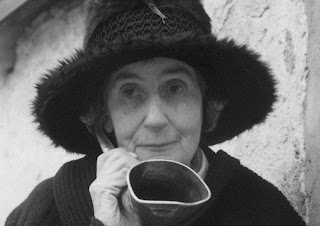 "The suit she was calling was fallen grandeur and in it she never missed a trick. A day came when this woman found in a dustbin in Bond Street a backless bead frock. No sooner had she seen it than she longed to wear it. As she did not at that time live anywhere in particular, it was difficult to think of a place sufficiently secluded for trying it on. She chose the churchyard in Flitcroft Street and sat among the dead to wait for nightfall. When it was barely dusk her eagerness had overcome her prudence. She started an impromptu striptease performance. A crowd collected large enough to attract the attention of the police and she was led away. The next morning when the magistrate asked her what she had been doing, with a gently mocking laugh at the uncouthness of the question she replied, 'What any woman would be doing at that hour. Changing for dinner.'" Quentin Crisp, The Naked Civil Servant.

Madame de Meuron was a Swiss aristocratic eccentric (or is that the other way around?) who owned Rümligen Castle. She went about the town with an ear trumpet asking people who they were; she would have her valet park his car anywhere he wanted and if she had a mind to use the tram refused to buy a ticket; "I was here before the tram," she would explain. She was very old. One afternoon she trapped a vagrant woman stealing apples from her orchard and had her locked in the coach house for two days. She was charged with false imprisonment and dragged before the local judge. However, in her own spirited defence she produced a mediaeval manuscript which authorized the owner of Rümligen Castle to administer petty justice. She was let off with a fine and a lecture on current law.

I don't think I could ever possibly achieve this high standard of personal style, but I don't stop trying. I can't help but be reminded of Edith Evans' words to Kenneth Williams, "but I'm very ordinary, dear."
Posted by Patrick Sheridan at 1:05 pm
Email ThisBlogThis!Share to TwitterShare to FacebookShare to Pinterest